GTA Wiki
Register
Don't have an account?
Sign In
Advertisement
in: Gangs, Gangs in GTA V, Gangs in GTA Online,
and 2 more
English

The group deals mainly with drugs, although Trevor wants to expand the guns trade by shipping firearms to the drug cartels in Mexico. Even though Trevor calls it an Enterprise or Industry, it's run mainly by four people: Trevor who is the CEO and muscle, Wade Hebert who provides information and some muscle, Chef who cooks meth and is used as muscle occasionally, and Ron Jakowski who works as his operations chief, informant and pilot (although on a rookie level). The GTA Online Protagonist and some rednecks are usually hired as muscle, guards or operatives.

It is a violent rival of The Lost MC, the Aztecas, the O'Neil Brothers and the Triads. Most of the rivals are wiped out by the much smaller TP Enterprises by the end of the game.

The company vehicles are Trevor's Bodhi, a couple of Blazers (both with custom license plates), a Sanchez and a Frogger with "TP Industries" and some other writing and pictures. This helicopter is revealed to be the same one used to capture Mr. K, Trevor keeping it as a down payment as he wanted to get paid for his involvement. Later on, if Trevor purchases the McKenzie Airfield, the company will also operate a Cuban 800 and a Dune Buggy for business.

Months before the events of GTA V, Trevor seems to have not long started TPI and takes notice of a few small time criminals who are making a name for themselves, and may have worked for him before, he hires them as a Heist crew and meets with them in an apartment. There he introduces them to Trevor Philips Industries and even has a shirt with T.P.I on the front and back, he explains his goals to the crew and they proceed to acquire what Trevor wants. The result of these efforts allows Trevor and Chef to establish their lab in the liquor store.

During the events of GTA V, TP Inc get into multiple fights with other Blaine County gangs. A brief war between TP Inc and The Lost MC, caused by Trevor killing Johnny Klebitz after having sex with Ashley Butler, results in the death of Clay Simons and Terry Thorpe, in the acquisition of Sandy Shores Airfield and in the destruction of The Lost trailer park

TP Inc also tries to create a business partnership with the Los Santos Triads, who seek to expand their business in Blaine County. Trevor takes Tao Cheng, son of the Triad boss Wei Cheng, and his translator to a visit in his meth lab in the liquor store, but during their visit the lab is attacked by members of the Aztecas and thanks to Trevor's violent and reckless behavior during the attack, the Triads choose to do business with the O'Neil Brother instead. After Trevor finds out about this, he blows up the O'Neil Ranch in retaliation.

Even while working in Los Santos with Michael and Franklin, Trevor never stops thinking about TP Inc and multiple times he calls Ron to know how his partner is handling his business. Trevor also makes several heist attempts against Merryweather Security, in order to acquire money or weapons to expand TP Inc.

During the course of the storyline, Trevor can buy the McKenzie Field Hangar, opening a set of side missions that involves selling and moving weapons across San Andreas for Oscar Guzman's buyers, operating as TP Inc.

Depending of Trevor's fate at the end of the game, TP Inc will have a different outcome.

If Trevor calls Ron during The Third Way, Trevor tells Ron that TP Inc has a bright future ahead, when mentioning that they won't be dealing with the Triads anymore, and they will have a large amount of cash coming through.

The events of this mission have been officially confirmed to be non-canon to the storyline, and the events featured do not relate to the series and therefore didn't happen.
For the canonical ending of Grand Theft Auto V, see The Third Way (Option C).
After Trevor is killed by Michael and Franklin, Ron sends a e-mail to Michael cursing him and saying that he lost everything, including the business he and Trevor had developed together, implying that TP Inc is finished.

In 2017, during the events of GTA Online: Smuggler's Run, Ron Jakowski states that Trevor has "gone Vinewood" on him and became a "guru" and a "lifestyle coach", and also indirectly refers to Trevor as his "old boss", meaning that Ron is no longer affiliated with TP Enterprises as of 2017.

By 2021, during the events of GTA Online: Los Santos Tuners, TP Enterprises is still active as Chef gets into another fight against the Lost MC, and requests the help of the GTA Online Protagonist and KDJ to destroy their meth labs and steal their shipment of meth for him. 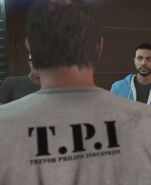 The GTA Online Protagonist with a Trevor Philips Industries shirt on her face and use it as mask.