Wasted
Busted
Matteo gets away

Niko: "So, I go into this factory and I ice this Fat Charlie?"
Bell: "That's right. Now, I'm gonna go make a lot of noise so no one thinks I had anything to do with it."
― Niko Bellic gets his missions from Phil Bell

Tresspass is a mission in Grand Theft Auto IV given to protagonist Niko Bellic by Phil Bell.

Phil instructs the player to kill the Ancelotti Underboss named Charles Matteo, who is hiding in an abandoned Sprunk factory in Alderney. Chubby Charlie plans to rat the Pegorinos out; he's going to fly a chopper out of Alderney into Algonquin to deliver a 'message' to the Commission, and reveal that the Pegorinos were behind the stealing of the shipment of coke from Vice City. Drive from the compound where Phil's office is to the Sprunk Factory. Phil gives Niko two possible options; attack from the abandoned underground service tunnel, or via the front door.

Niko enters and massacres the Italian and Russian Mafiosi in the factory and on its rooftop, before reaching a fleeing Charlie. A cutscene occurs; Matteo's Maverick arrives and descends slightly, allowing him to grab onto it. At this point, the player may choose to shoot him off the landing skid or destroy the helicopter in its entirety. After being disabled by the player, the Maverick will eventually explode and crash down into the open roof of the Sprunk factory, killing all those aboard, but most importantly, Chubby Charlie and his pilot (as Chubby Charlie stated that his pilot would "still deliver the message to the Commission" in the event of his death). 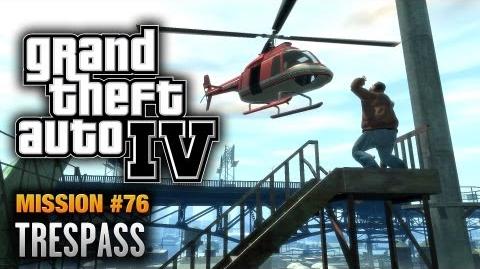