Trees are plants with a large stem or "trunk" that supports large limbs called branches that in turn have leaves. Trees have appeared in every GTA game since GTA III. Trees are indestructible to the player and can not be destroyed nor damaged. In some GTA games such as GTA San Andreas, trees grow naturally in the wilderness. There are many different species of trees in the GTA games, ranging from the towering redwoods in GTA San Andreas to the stalky, leafy maple trees found predominantly throughout GTA IV.

Tress have the property to be unbreakable and nondestructive, compared with other elements in-game like certain signs or poles, they're considered solid objects and can't be modified or damaged in any way.

List of tree species found in the GTA series

A dead tree in GTA SA 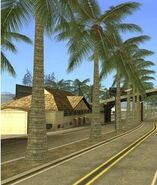 Palm trees in GTA SA
Add a photo to this gallery
Retrieved from "https://gta.fandom.com/wiki/Trees?oldid=926616"
Community content is available under CC-BY-SA unless otherwise noted.