The Trashmaster remained mostly the same throughout the 3D Universe games, being a triple-axle truck with a greenish waste rear-loading compactor in the back and capacity for two occupants.

In Grand Theft Auto III and Grand Theft Auto: Liberty City Stories, the Trashmaster resembles a Mack MR cab-over-engine garbage truck, but has squared headlights placed within the grille and a smaller windshield. The exhaust stack is located on the passenger side and the rear end of the compactor is fitted with numerous tail lights above and amber lights at the bottom, as well as a red/white warning stripe in between the lower lights. It normally spawns in white, with the fenders/mudguards painted with a secondary color.

In Grand Theft Auto: Vice City, Grand Theft Auto: Vice City Stories and Grand Theft Auto: San Andreas, the Trashmaster shares a similar cab design to the Yankee, albeit with small differences in terms of details, such as the grille and vented hood in GTA Vice City, the smaller headlights and fender-mounted amber lights in GTA San Andreas, and the grille design and lack of silver door details in GTA Vice City Stories, as well as the exhaust stack on the driver side. The tail lights are generally similar to those of the cab-over-engine iteration, but the red and white tail lights are rotated in a vertical positioning and the top marker lights are slightly more centered. In addition, the GTA San Andreas iteration lacks the red/white warning stripe on the rear end, but bears Sanitary Andreas logos around the rear quarters of the compactor. This model of the vehicle spawns in a white color for the cabin.

The Trashmaster in Grand Theft Auto IV assumes a revised model and resembles a 2000 Mack LE series refuse chassis, particularly those utilized by the Department of Sanitation New York (DSNY).

The truck is depicted as a cab-over-engine, single-hopper garbage truck with the same triple-axle layout as in the 3D Universe, being mostly similar to the GTA III and GTA Libert City Stories renditions. The cabin of the truck is relatively short, having a black front bumper at the bottom with a license plate on the passenger side and a large non-functional plough attachment on the center. Above the bumper and partially behind the plough attachment, there is a grey/silver rectangular grille with various vertical elements and small grey hooks beside it, while the area above bears a front light setup similar to the Packer, with the amber lights located beside the main ones.

On the sides, the truck has large side steps at the bottom and grab handles next to the doors, as well as large door-mounted mirrors with two antenna on the upper frames and various marker lights. The split windshield has a slanted profile and is a bit larger than the side door windows, while an airhorn is seen mounted on the passenger side of the cab roof. Directly behind the cabin, there is an exhaust stack on the passenger side and the truck's filter system on the driver side.

The rear section is mostly predominated by the trash compactor sitting atop the truck's chassis, which is twice as tall than the cabin (though the cabin itself is actually about the same size, just sitting in a lower height). Along the chassis, two chrome fuel tanks are mounted near the front end on either side, and a storage box on the driver side. Along the sides of the container there are red/white warning stripes and numerous marker lights, while an unusable ladder can be seen on the driver side. On the rear end, the vehicle has vertical warning stripes and numerous tail lights, with the upper ones being circular and the lower ones squared. At the bank of the truck, a functional (but not to the player) "trunk" serves as the compactor which opens and closes slightly. It does not appear open during normal gameplay, however.

The entire truck is only seen in a white base colour with Liberty Sanitation Department decals across the vehicle, including the company logo on the sides, and numerous warning stickers on both ends. It is commonly seen in a It uses a set of industrial wheels also seen on vehicles like the Mule and the Flatbed.

In Grand Theft Auto V and Grand Theft Auto Online, the Trashmaster appears mostly unchanged compared to its previous iteration (appearing to be a combination of the Mack LE and Peterbilt 320 refuse trucks). However, numerous edits have been made to the model.

The original front bumper on the GTA IV model has been replaced with a single, flat-fronted chrome bumper with two tow-hooks, while the grille is narrower and bears three vertical elements with black horizontal ones. The amber lights were moved to below the headlights, and two additional handles have been added underneath the windshields. The sides of the cab are mostly identical, but the passenger and driver-side doors lack the beveled border edge found on the GTA IV model. The cabin area also remains identical in shape, but the wipers have been swapped in a way that means they would rotate in the opposite direction, while a chrome sun deflector has also been added in front of the windshields. The roof bears additional marker lights and another airhorn on the driver side. The exhaust stack has also been modified with a slightly curve at the top. The interior is more or less identical to the GTA IV model, where in the enhanced version, gains an updated one with similar textures and analog dial set from vehicles like the first generation Burrito and the Phantom.

The rear section and compactor remain generally the same, but several changes were also made around it. Along the chassis, the smaller chrome fuel tanks have been switched out for a larger one on the driver side and a smaller box on the passenger side. Fender flaps have also been added in front and behind the rear two axles, which is also similar to trucks like the Biff and the Tipper. The front end of the compactor adds a small sign on top reading "Keep Los Santos Awesome", while the sides have large advertisements reading "Little Pricks" and "Butt Lovers". More marker lights have been added to the sides and the ladder found on the GTA IV model has been moved to the passenger side and toward the front, while an access hatch has also been added to the left front side of the compactor. On the rear end, the original lighting setup has been altered slightly; the inner taillights at the top are reversing lights, and the rectangular indicator and brake lights at the bottom are circular lights.

The truck appears in a permanent worn, rusty texture and may appear in several different shades of grey, along with the City of Los Santos seal on the front doors. In the files, it is set to spawn in a greyish blue primary color, which is partially visible on the sections holding the brown mudflaps. It also retains the same industrial wheels.

Despite the fact that the vehicle has no badging, police radio chatter reveals that the manufacturer is Jobuilt. 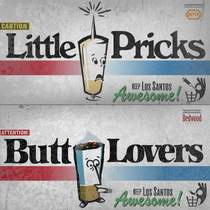 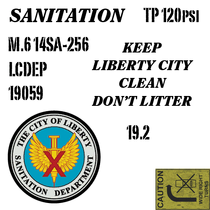 The Trashmaster has a slow but powerful engine, and when at its top speed, is a threat to other motorists on the road. However, durability is slightly worse than expected for a truck of its size, but deformation/body damage is mostly unnoticeable. The truck has a high chance of rolling over when cornering at high speed.

Returning in the HD Universe, the Trashmaster comes much slower and harder to handle, possibly because of the large and heavy compactor. The unequal weight distribution also results in a slow acceleration and sluggish steering, which can cause mistakes when reversing down alleys and attempting to turn around. However, it is still a threat to small vehicles.

In GTA V and GTA Online, the Trashmaster is no longer heavily dragged by its weight (despite being heavier), and is more secure and stiffer in suspension. Cornering is much of an improvement, but oversteer is still present. Acceleration is more responsive, as are the throttle and brakes.

Again, the truck is powered by a large diesel engine, with a RWD layout, and a 5-speed gearbox. Its engine sound is the same as in GTA IV.

The "Garbage Truck", an earlier iteration of the Trashmaster in GTA III prior to the game's release.

Liberty Sanitation Department workers hanging from the rear of a Trashmaster in GTA IV.

Michael stealing a Trashmaster during the mission Trash Truck.

The Trashmaster on the updated Rockstar Games Social Club.

The Trashmaster in the cinematic preview on Rockstar Games Social Club.

An alternate version of the Trashmaster appears in the Heists Update, in the heist setup mission Series A - Trash Truck. This version only differs by having a very rusty rear, most notably at the bottom. Compared to the regular version, players are able to stand on top of the Heist variant without the risk of falling off. This variant is also used in the Trash Trucks MC Business Supplies Sell Missions. 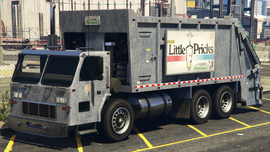 An all-black Trashmaster appears as part of the props in the Payphone Hit: The Cofounder mission at the Motor Motel location.