In-game time
“Los Santos isn't Liberty City, but the idiots I'm dealing with still want to be in the waste management business. They think it's a clever front for moving powder. Son strange - they must love the smell of trash. Can you stop this stupidity, wipe out the operation, and clean up El Burro Heights for real.”
— Description

Trash Talk is the final contact mission unlocked in Grand Theft Auto Online. It is given to the player by Martin Madrazo. It is available for up to 6 players.

Madrazo orders the team to destroy four garbage trucks from a rival crew around the city. After all the garbages trucks are destroyed, the team needs to go the rival crew operation by some abandoned warehouses in El Burro Heights. There will be five parked trucks to be destroyed and the trucks will be protected by several heavily armed enemies. After the team destroys all the trucks, they will have to kill the remaining members and one more group coming in a Granger. After all trucks are destroyed and gang members are killed, the players must chase down the crew boss, who is fleeing on foot. The crew boss is unarmed and after he is killed, the job is completed. 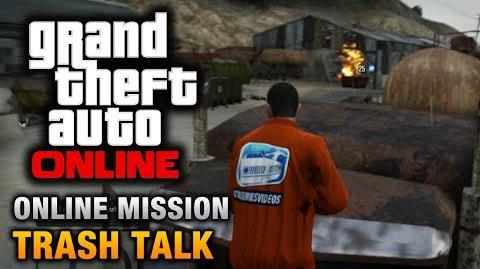