"Choices, choices. You've only got a few seconds of hurtling down Mount Chiliad on a BMX to make the age-old decision. Left or Right? With the pack or on your own? Jet-powered super car or gliding motorbike? Luckily for you, this is one of those times when there's no bad call. Lap Transform Race starting on the BMX, also featuring the FMJ, Rocket Voltic, Besra, Oppressor and Parachutes."
―Race description.

Split Personality is a Transform Stunt Race featured in Grand Theft Auto Online as part of the continuation of the Smuggler's Run update, released on October 17, 2017, during the Transform Race Week event. It is available for up to 16 players.

Split Personality is situated above Mount Chiliad and spans between the Paleto Forest and Mount Gordo. The race is unique in that it features a decision-making challenge in which each approach differs dramatically, but equates to roughly the same amount of time taken. It also features a variety of transport, from super cars to parachuting. The race is a 38 checkpoint long Lap race, default to 2 laps. Between checkpoints 4 and 23, players can take one of two different routes.

The race doesn't allow a custom base vehicle as it is locked to the BMX, however custom Transform Vehicles are allowed, assuming the player owns them. 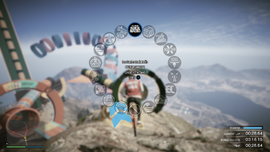 The radio wheel is enabled for cycles during this race. 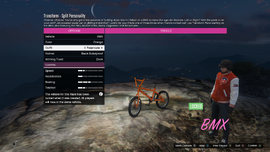 The race is locked strictly to the BMX. Players can choose different colors.

Retrieved from "https://gta.fandom.com/wiki/Transform_-_Split_Personality?oldid=1275471"
Community content is available under CC-BY-SA unless otherwise noted.