"Something about the Los Santos docklands makes for a damn fine shipwreck. But why limit yourself? Super cars, planes and helicopters also make very picturesque seabound detritus. Get creative on this destructive lap Transform Race starting on the Seashark, and also featuring the Shotaro, Super cars, the Mallard and Havok."
―Race description.

Get Wrecked is a Transform Stunt Race featured in Grand Theft Auto Online as part of the continuation of the Smuggler's Run update, released on October 17, 2017, during the Transform Race Week event. It is available for up to 16 players.

Get Wrecked is based around a huge boat docked in Elysian Island, seemingly inspired by Titanic. It is constructed with several layers of stunt track, a series of red and white blocks which create the hull and shell, and a series of vertically-positioned black tubes, two of which with smoke. The race primarily focuses around this boat, and surrounding props, including cones and arches indicating markers for planes and helicopters to pass around. On the top of the boat, a short space of stunt track forms a slalom for super cars, before they are launched into the air and transformed into helicopters. The race is a 73 checkpoint long Lap race, default of 2 laps. 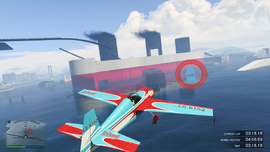 Retrieved from "https://gta.fandom.com/wiki/Transform_-_Get_Wrecked?oldid=1275451"
Community content is available under CC-BY-SA unless otherwise noted.