"Popular with people who buy a car, then want to make it look a different car. Probably the same kind of people who like creative plastic surgery."
―GTA San Andreas Website.

TransFender is an automobile modification shop in Grand Theft Auto: San Andreas which allows the player to modify various road vehicles in the game.

There are three TransFender locations throughout San Andreas, with one in each major city:

Los Santos: In Temple, next to the Temple Pay 'n' Spray.

San Fierro: In Doherty, around the side of Wang Cars.

Las Venturas: At the east end of the Come-A-Lot area.
Add a photo to this gallery

Vehicles customizable at TransFender include the following:

The range of modifications available for vehicles at TransFender depend on the vehicle's model.

Basic options, including body colors, nitrous oxide systems, wheels, car stereos, and hydraulics, are available for all vehicles. However, other groups of parts are only exclusive to certain classes of vehicles. Even so, the number of parts available for each option are usually limited to a select few, depending on the vehicle model. The "Exhaust" option is available for most road vehicles, but unavailable for the same vehicles deprived of body kit parts.

For a more detailed range of parts for each vehicle, see the vehicles' respectable pages.

A modified Sunrise at a TransFender, illustrating a vehicle with a wider range of "body kit" parts.

A modified Mesa, illustrating a vehicle with a more limited selection, but with specialized "Light" options that includes fog lights in the front.

A modified Oceanic that illustrates a lower end range of parts for a select few cars. 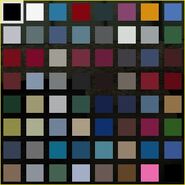 Colors available in any car-mod shop. 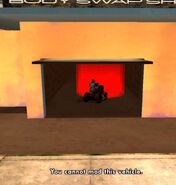 "You cannot mod this vehicle" message, shown after driving a Mower into a TransFender.
Add a photo to this gallery

The following lists a complete range of modifications available at TransFender. Italicized pricing denotes prices at the Las Venturas TransFender, which charges 20% more except Colors, reflecting the penchant for the city's businesses to overcharge by 20%, such as at Ammu-Nation stores and fast-food restaurants. The prices are determined by the shopping.dat file; below are the default prices.

Retrieved from "https://gta.fandom.com/wiki/TransFender?oldid=1110967"
Community content is available under CC-BY-SA unless otherwise noted.