In all of its appearances, the Tanker Trailer is depicted as a basic trailer used to carry fuel or other liquid cargo. It is often found in most games, although only a few of them allows it to be towable trailers.

The Tanker Trailer is depicted as a brown trailer with two hatches on top.

The Tanker Trailer is now designed as a white trailer with a Xoomer livery. It also features a hatch on top and an unused ladder on the right side. The front end was altered with a rounded portion in order to fit it on the back of a Linerunner (as the Linerunner's rear section is smaller compared to the Tanker and the Roadtrain).

The tanker trailer appears in GTA V as a towable version of the prop tanker trailer that appeared in GTA IV. It only appears in an orange color scheme with RON stencils. The cylinder itself is orange, while the end caps are white. The RON slogan and logo appears on either side of the tanker cylinder, while the front and rear ends are marked "RON" with the logo.

The cylinder has fuel rails on either side, as well as three covers on the top. A ladder and fuel extraction pipes are mounted on the back. Several warning signs are placed along the side of the tanker. The fuel cell is placed on a large twin-axle chassis with side guards, a large rear bumper and a functional trailer stand. Along the sides are warning stickers. Brute markings are also found on the chassis.

The trailer was changed significantly in the enhanced version of GTA V. While the initial purpose and functionality remains identical, the trailer's chassis is replaced with an updated model, resulting in numerous changes. The chassis pegs holding the fuel cell in place no longer protrude from the fuel cell's underbelly and are much narrower, following the curvature of the tank. The side guards have been removed, and in their place are several additional pipes attached to the chassis. The chassis base is also slightly different in shape, with new red and white warning stickers. Numerous texture changes have been made, including the mapping of the tanker; the text and logo have been shifted slightly along the sides of the fuel cell. Textures have been added to the front mudguards too. The rear bumper guard is now slightly wider and different in shape, the rear lighting units have been shifted down onto an entirely new section of the chassis, and rear deflectors have been added. Tanker specifications replace one of the warning stickers on the rear, just behind the rear ladder. BRUTE logos have also been added to the rear mudguards.

It can be noted that the changes made to the RON Tanker trailer were also applied to both the original and enhanced versions of the civilian tanker trailer. The Army Trailer tanker, however, was not updated.

The Tanker Trailer is pretty much like the Articulated Trailer: Heavy, large and forces the player to perform wide turns in order to avoid damage. It also alters the semitrailer's handling, although is not severe (depending on what semitrailer is used).

With the implementation of fuel in GTA V and GTA Online, the tanker poses a huge threat to both the driver, the vehicle, and other road users in dangerous situations. The tanker doesn't explode on direct impact with landmass, buildings, or solid props around the map, however if another vehicle manages to crash into the tank itself, it can sometimes cause an explosion. The trailer is relatively heavy, meaning it causes a huge amount of drag on semi trailers, causing understeer.

Tankers are also heavily exposed to gunfire, however the player must be wary that NPC-towed tankers will explode after little gunfire, while player-towed tankers tend to be immune to this. Fuel will leak out of tankers regardless, but eventually patch up if enough resistance to gunfire is given. When the tanker bursts into flames, it will explode, which more often than not, causes the semi truck towing it to burst into flames and eventually explode. Explosions around the trailer will usually cause it to explode (close) or burst into flames (nearby) too. Tankers towed while on fire will last several seconds before exploding, and will only detach from the rig once exploded, rendering it unusable.

The tanker trailer has appeared in prop-form in all GTA titles following the introduction of the 3D Universe, in a variety of colors and forms.

A Tanker with its trailer in Grand Theft Auto: San Andreas.

A Tanker trailer in the original version of GTA V.

A Phantom with RON Tanker trailer attached as seen in Grand Theft Auto V's Enhanced Version trailer. Notice it bears the design of the original model, despite being updated in the enhanced release.

A version of the trailer without RON markings was added to GTA Online as part of the Heists Update. This trailer only appears during one mission - Series A - Steal Meth, and serves as a civilian trailer used by the O'Neil Brothers containing meth. It is stolen during the mission. It does not appear outside of the mission and cannot be kept. 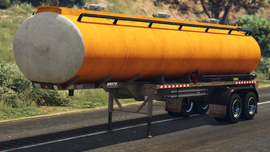