The Trailer is depicted as a single-axle, small-sized trailer that spawns either as a small utility trailer or as a generator trailer. Both versions share the same chassis length, silver tow beam, front stand with an auxiliary wheel, curved wheel mudguards with a metallic appearance and the corresponding square marker lights and tail lights, as well as the same industrial wheels from trucks like the Mule, the Benson and the Phantom.

The first one spawns in a light grey texture with blue stripes bearing "Trailer 200" markings on the sides and rear end, mounted over a relatively wide chassis of the same appearance as the box. It usually carries a variety of tools and equipment, which are not attached to the vehicle model and will either slide within the box or fall to the ground if the trailer is flipped down or hit with considerable force.

The second one spawns in a white color with red/white warning stripes and yellow warning symbols around, mounted on a relatively narrow chassis of a black color. There are control panels on either side, small unusable compartment doors and vent textures, as well as small black extensions over each side of the axle, intended to connect the mudguards.

The trailer features high ride height and a lack of proper suspension, meaning that it has a tendency to flip, roll or generally bounce up and down when travelling at high speeds and making quick maneuvers. Being a very light trailer, it can be easily pushed by smaller cars like the Blista or the Issi. The utility trailer has enough room for a motorcycle or a small ATV like the Blazer when empty, but care should be taken when attempting to carry such vehicles, as this results in increased weight and higher chances of flipping it down when performing sharp turns. 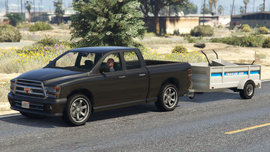 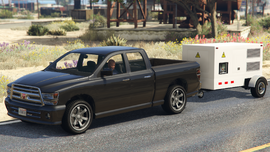