GTA Wiki
Register
Don't have an account?
Sign In
Advertisement
in: Articles with section stubs, Vehicles, Vehicles in GTA V,
and 3 more

The Trailer is a towable trailer in Grand Theft Auto V.

The trailer is depicted as a small rake trailer with a blue color. The trailer features two stands for when is unused and, unlike the vast majority of vehicles, it does not feature any sort of wheels.

According to the files, the only vehicle that can tow this trailer in the Fieldmaster.

The Trailer is very lightweight and also one of the smallest in the game, nearly as small as the Small trailer. Because of its lack of wheels, the trailer is very prone to slide constantly from side to side when moving around and when encountering uneven roads or bumpy terrain, as well as being a bit troublesome on the streets due to its apparent width. 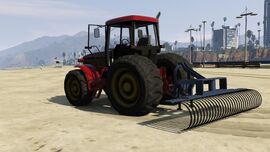 A Trailer being towed.