The Tractor is generally designed as a simple, open air farming tractor with large driving wheels at the back and a pair of steerable wheels at the front. It appears to be based on the Ford N Series of tractors.

Like the Tow Truck (and Baggage Handler, to a degree), the Tractor can be used to tow other vehicles. This is very useful when transporting locked cars, or special vehicles in the game. The Tractor also has its own trailer, called the Farm Trailer.

Like most industrial vehicles, the Tractor cannot be modified in any modification garages.

The Tractor reappears in GTA V and GTA Online as a vintage tractor, alongside its modern counterpart, the Fieldmaster. It now resembles a variety of early 1900s tractors, although it most closely resembles the Fordson Model F.

The Tractor has a rusted bodywork with two small, thin wheels on the front and two large, thick wheels on the back, which have a rugged pattern to give it more traction on dirt. The driver sits on a steel seat connected to the vehicle by small bars and there are two mudguards over the rear wheels. Its engine is located on the front and is partially covered.

Like the Combine Harvester, the Tractor is unsuitable for use as a road vehicle due to its slow speed, which makes it a hazard on the roads in San Andreas, and are a common cause of accidents and pile-ups. The Tractor does, however, possess a great deal of torque and is capable of climbing incredibly steep hills. Its smaller front wheels make the Tractor less responsive during steering due to lesser traction. Despite its unsuitability for travel on major roads, the tractor is commonly found on large thoroughfares, in the countryside and even along highways.

Its engine does not have any hint of what it could be, but it has the same engine sound as the Walton and the Dozer.

The vehicle's tow hitch is primarily intended for the Farm Trailer, but like the Tow Truck, it can tow almost any kind of vehicle.

The Tractor's age and use as a farming vehicle makes it one of the slowest vehicles in the game. The Tractor is extremely weak and has very little torque or power. The Tractor's lack of power is likely due to its neglected and worn out condition. Like the Bus, it allows the player to use a Sawed-off Shotgun for drive-bys.

The Tractor appears to be powered by a poorly modelled V16, evidenced by two distributors on either side of the engine block with four spark plugs each (a total of 16 spark plugs), which appears to be coupled to a 3-speed gearbox in a front engine, rear wheel drive configuration. The engine sound, as expected from an apparently outdated vehicle, is rather noisy, reflecting its worn appearance, albeit still functional.

The Tractor on the updated Rockstar Games Social Club.

The Tractor in the cinematic preview on GTA V Rockstar Games Social Club.

The Tractor seen in the Pisswasser commercial. 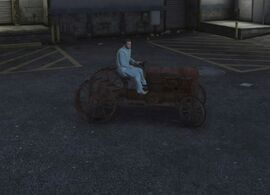 Michael on the Epsilon Tractor in GTA V (enhanced edition).