Michal Sinnott
“You fucking homo. You're dead. Dad, he said I had a massive... Jimmy called me a bitch!”

In 1991, Tracey was born to Michael and Amanda De Santa. In 1993, she became an older sister when her brother Jimmy De Santa was born. While Michael was leading a career in bank robbing, Tracey and her family lived in a trailer park somewhere in the Midwest. Tracey and Jimmy became acquainted with Michael's partner-in-crime, Trevor Philips, who promised to hurt anyone who ever wronged Tracey, when she sat in his lap at one point. In 2004, Michael, fearing for his family's safety and wanting to start over, faked his death during a failed robbery in Ludendorff, North Yankton, and moved his family to Los Santos. During this time, her relationship with her family became strained due to her parents disapproving of her choice of lifestyle (including less than stellar boyfriends and several attempts to make porn) and Jimmy's frequent attempts to demean her.

“You ruined my life.”

In 2013, Franklin Clinton breaks into Michael's House to repossess Jimmy's car. As he searches for it, he overhears Tracey arguing with Jimmy.

Afterwards, while Michael tries to relax by the pool, he put on earbuds playing music to drown out the sound of Tracey arguing with Amanda about how her then boyfriend, Gary Scales, can't sleepover that night because Amanda thinks that he's a "bum", and accuses him of being homeless. Tracey angrily denies this, screaming that he just doesn't have anywhere else to stay. However, she breaks up with him on the same day, as seen on her Lifeinvader.

Later, after Michael and Jimmy finish a bike race to the Del Perro Pier, Jimmy informs Michael that Tracey was out meeting some guys from the porn industry in a yacht near the pier. Michael then swims to the yacht and finds Tracey in the middle of a mini-party, dancing on a table while several of the producers watch. He disrupts the party and tells Tracey to leave with him after throwing one of the producers overboard, despite Tracey's protests. Michael steals a Seashark to take him and Tracey ashore, but they are chased by Blake and Freddy, two of the producers. Eventually, after either losing or killing the pursuers, Michael leaves Tracey with Jimmy at the beach.

Later, as she tries to watch Fame or Shame, Michael enters the room to watch Jay Norris's speech at the Vinewood Bowl. Tracey doesn't want to change the channel, forcing Michael to angrily shoo her off the couch and out of the room.

Later, Tracey auditions for Fame or Shame without telling her parents, but Michael and the recently arrived Trevor find out from Jimmy. When they learn Tracey was auditioning as a dancer, Michael and Trevor, knowing Tracey will embarrass herself due to her lack of dancing skills, head to the Maze Bank Arena, where the audition is being held. When they arrive, Tracey is being introduced to the judges by the host, Lazlow. Tracey performs an erotic dance and Lazlow joins in, enraging both Michael and Trevor. They interrupt the audition and chase Lazlow from the Arena. Afterwards, Tracey calls Michael and berates him for "ruining her life". She seems to move out, as her room appears empty.

“You're deranged dad, you need help before you kill yourself!”

— Tracey in a call to Michael after the mission Did Somebody Say Yoga?

After Michael gets into a fight with Amanda's yoga instructor, Fabien LaRouche, Amanda and Jimmy leave. A phone call with Tracey afterwards reveals that she convinced Amanda to leave Michael and move to Fabien's place. Tracey also tells Michael that that she is worried about him, to which Michael responds that she has no idea what she’s talking about.

During Michael's family's absence, Tracey shows that she cares about her father, either sending e-mails asking how Michael is and telling him how her life with Fabien is going, along with posting on Michael's Lifeinvader page, asking if he is still alive. However, if Michael tries to call her, she angrily tells him to leave her alone, before hanging up. It's also implied by her new voicemail message that she starts doing pornographic shows via a webcam.

Michael: "Hey, guy was talking smack to your mother."
Tracey: "Well, I applaud you, Pop."
―Michael and Tracey on the way to Dr. Friedlander.

Eventually, Michael decides to convince his family to move back in with him. He and Jimmy go to the Blazing Tattoo studio to take Tracey to a family therapy session, but find her there begging Lazlow for another chance in the Fame or Shame TV program. Lazlow says that he will let her on the show if she gives him a blowjob, which Michael overhears, causing him to attack Lazlow and forcibly pierce his nose, ear and brow, along with tattooing a penis on either his back or chest. He finally ends the humiliating experience by cutting off Lazlow's ponytail. Lazlow, in a panic, agrees to allow Tracey back on Fame or Shame, and Tracey, impressed by her father's devotion, agrees in going with the rest of the family to a therapy session with Dr. Friedlander's. Afterwards, Tracey, along with Amanda and Jimmy agree to move back in with Michael.

At some point later on, Tracey calls Michael and asks him to help deal with a stalker from the internet, who had been following her. If Michael agrees to help, they will go to different areas in Vinewood looking for the stalker. Once they find him, Michael can either kill him or let him go. If Michael spares him, Tracey asks if she can talk about how Michael stood up to the stalker online, but Michael says no. If Michael kills the stalker, Tracey angrily tells him that she just wanted him to chase the stalker away, not kill him. Regardless of what Michael does, she will still be happy that her father helped her. If Michael doesn't agree to help her, she will pay a couple of guys to beat up the stalker, taking money from Michael's bank account to do so.

Finally, after Michael indirectly caused the death of Molly Schultz, the lawyer of billionaire Devin Weston, Merryweather Security operatives are sent to kill Tracey and Amanda in retaliation. Michael rushes home and kills all the Merryweather mercenaries to save his family. Amanda, Jimmy and Tracey once again leave, this time for their own personal safety.

“Now that I'm almost famous and have stalkers and shit, this psycho-over-protective-dad routine is finally starting to pay dividends! Love you, Pop.”

— Tracey on Michael's LifeInvader page, about their relationship.

Tracey begins studying for college and, in a conversation while hanging out with Jimmy, Michael says that when he becomes a famous movie producer, he might turn Tracey into a movie star.

After the events of Grand Theft Auto V

Throughout Grand Theft Auto Online, reruns of her episode on Fame or Shame continue to be played on TV. At some point, she gets her own T-shirt merchandise that can be bought in clothing stores.

Jimmy can be heard yelling at Tracey over the phone while working at the GTA Online Protagonist's arcade.

Tracey's true personality is hard to define, as she is quite upset about many things in-game, including having bad relationships with the members of her family, who disapprove of her behavior. She appears to be very spoiled, obnoxious, and immature, and is portrayed as a stereotypical "daddy's girl". She is known to be rebellious in her actions against her parents, and even going as far as auditioning for Fame or Shame without their approval. She is an example of the valley girl stereotype.

Tracey is also shown to be quite naive and dim-witted, often fitting the role of a stereotypical dumb blonde. Her dialogue is almost always used for comic relief. Her sheep-like nature gives her the impression that everyone, including those outside of her family, has her own best interests in mind. When things do not go according to her standards, she is usually rendered shocked and throws a tantrum, usually screaming and pounding her fists on the floor, blaming everyone that is "ruining her life".

Despite her rebellious, childish, obstreperous, and above all, disagreeable behavior, she has some sense of decency. There have been moments throughout the storyline where she has shown respect and compassion towards her father, through e-mails and text messages, worrying about his safety when he is in danger and missing him when he is separated from his family. Despite crashing her audition for Fame or Shame, she still prefers him as a father figure over Fabien.

Unlike the rest of her family, Tracey has blonde hair (however, this may be dyed as her eyebrows are black). She has three sets of tattoos, one on her shoulder, a near vertical line of stars on the back of her neck and another on her lower back (commonly known as a "tramp stamp"). She also has a butterfly on the top of her left foot. 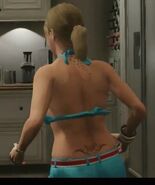 Tracey's tattoos seen on her back. 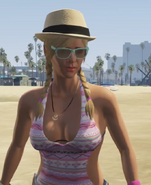 Tracey on Fame or Shame

A bulimic Tracey throwing up.

Michael roughhousing with Tracey over a television remote during Friend Request.

Tracey walking out of the living room furiously.

Tracey as a kid wearing her private school uniform.

Another shot of Tracey on Fame or Shame. 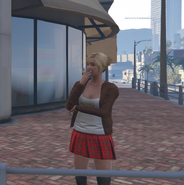 Tracey at a young age, cooking with Amanda.