GTA Wiki
Register
Don't have an account?
Sign In
Advertisement
in: Vehicles, Vehicles in GTA V, Trucks,
and 5 more
English

View source
watch 02:56
Raise a Floppa - The Loop
Do you like this video?
Play Sound
For other uses, see Towtruck.

The Towtruck's design is derived from the Yankee from Grand Theft Auto IV, using an identical cabin design, flat bumper and front lights. However, it uses a different grille design, a flat hood, visible door hinges, fuel tanks with side steps below the cabin, marker lights and trumpet horns on the roof, no circular mirrors on the sides and small box-shaped tanks behind the cabin. The rear section uses a large bed with square tail lights on the outer sides, a black bumper on the lower side and small mudguards below. The same bed mounts a large towing rig with dual crane arms and two functioning amber lights on top, which can be activated with the horn (similar to its smaller counterpart).

The Towtruck is fitted with a CB radio, and occasional trucker chatter can be heard regardless of whether the main radio is turned on or off. The chatter will only play if playing as Trevor and in Blaine County.

The truck always spawns with a rusty appearance and may spawn either in a white or red color for the cabin and the bed, and uses industrial wheels seen in vehicles like the Phantom and the Mule. 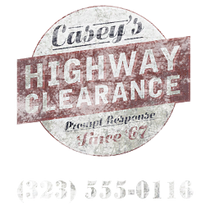 The Towtruck's performance is average considering its weight, size and purpose. The truck is capable of reaching great top speeds, but due to its weight, it is sluggish and unresponsive when accelerated. Its long wheelbase and chassis results in it having a large turning radius, but thanks to its weight, it is very stable when cornering and maneuvering at high speeds. Additionally, it can easily ram smaller cars off the road, and its durability is remarkable. Overall, it performs similarly to its scrap and salvage equivalent, but has higher top speed and acceleration.

The vehicle is powered by a large twin-cam 4-cylinder engine that is fitted with a large turbocharger to the left of the engine bay, which is laid longitudinally, in a front engine, rear wheel drive configuration and coupled to a 4-speed gearbox. The engine sound is shared with most light trucks and its scrap and salvage equivalent, being smooth and high-revving.

The Towtruck shares its towing capability with the smaller towtruck, which can be completed by reversing the truck up to a vehicle and setting the crane height to the vehicle being towed (or driving a car into the hook), until a clunk noise is heard to register the attachment. However, due to the raised bed and much larger crane, it is able to tow much larger vehicles, and drive with seemingly no issue. The crane's arm can be raised and lowered similar to its smaller counterpart, albeit on a much larger scale to compensate for the raised bed.

The Towtruck can tow an indefinite amount of tow-trucks, with the mass of each having minimal effect. It seems the mass of a tow-truck being towed by another tow-truck has no impact to the performance of the towing vehicle, due to it being a tow-truck. Of equivalent mass, the Rhino Tank cannot be pulled at all. The more Towtrucks that are towed, the more likely one will disconnect from the chain. [1]

Spawned at Procopio outside Dignity Village. Note the mechanic under the broken down Granger.

The Large Towtruck in the cinematic preview on Rockstar Games Social Club.