"French bicycle races may have lofty alpine scenery, drugged up manorexics and classical architecture, but when it comes to heavy industry, polluted beachfronts, and real criminal activity there's just nothing like a stage in LS. Classic point to point bicycle race through the detritus of the Del Perro coastline."
―Description

Tour de Santos is a Bike Race featured in Grand Theft Auto Online for the PS4/XboxOne only. It is available for up to 30 players.

This race was added in the initial release of Grand Theft Auto V for 8th generation consoles and has not been made available for PS3 or Xbox 360 versions of the game. 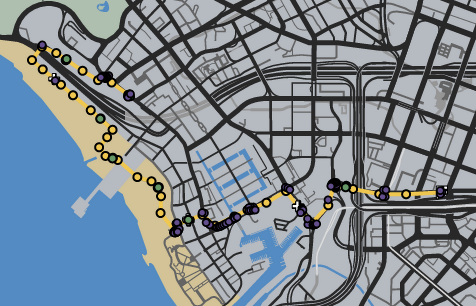 Retrieved from "https://gta.fandom.com/wiki/Tour_de_Santos?oldid=1211620"
Community content is available under CC-BY-SA unless otherwise noted.