The Tour Bus features an open top deck, complete with visible passengers on the seat. Like the Double Decker, the vehicle is also constantly painted red.

The Tourbus returns in Grand Theft Auto V and Grand Theft Auto Online with a much different design, based on real-life tour buses operating in Los Angeles (bearing a similar color and scheme from those of Access Hollywood Tours).

The Tourbus is depicted as a minibus with a similar cabin design to the first generation Burrito, but having an extended chassis with a large, wide compartment on the back, similar to the Camper. This compartment has eight seats that passengers can use, and what appears to be two access doors (although these are not functional and the occupants simply warp directly to the rear seats). The rear end has four square tail lights on each side which are placed in a vertical positioning, consisting of the main, brake, turn and reverse lights. The Tourbus may appear either in an "open-top" form, which exposes the rear section from the sides and roof area, or in a "closed-in" form, having large windows on the sides. The van appears with a Light Smoke window tint applied by default.[1]

The Tourbus is only available in an all-blue livery with "Vinewood Star Tours" markings around the body and on the interior of the rear compartment, together with "12 amazing ports of call!" markings on the doors (changed to "20" in the enhanced version). In the files, however, it spawns in an all-white color, which is only visible on the inner trimmings of the doors and the rear compartment when the roof extra is not present. It uses the same industrial wheels from the Burrito and its derivatives. 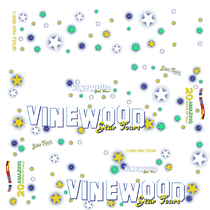 The Tour Bus' performance is the same as that of the Double Decker, being poorer than that of the Coach in Grand Theft Auto, but exactly the same as the Coach in Grand Theft Auto: London 1969. Being the one of the heaviest vehicles in the game (the same weight as GTA and GTA London 1969's Coaches and the Double Decker), the bus is predictably slow, with a very poor top speed but average acceleration. The bus also possesses below average grip and handling, and average braking. Although game files reveal the bus has a lucrative base export value of £1,000, the Tour Bus cannot be exported due to its large size.

The vehicle performs poorly in all areas of handling; due to its size and weight, acceleration and top speed are mediocre. Handling leaves much to be desired, as it has a very wide turning radius and it suffers from understeer. Its soft suspension also leads to excessive body roll. Durability is average, as the bus can withstand a fair amount of abuse before its engine fails, and it can ram other cars off the road quite easily.

The vehicle appears to be powered by a transversely laid, double overhead camshaft Inline-4, which is stated to be a 4500cc (4.5L) Turbo Diesel engine similar to the Ambulance. The sound emitted when at idle and accelerating sounds like a typical low-revving diesel engine, similar to the Burrito and most vans. This would be vital considering how heavy the vehicle is.

The Tourbus in the original version of GTA V. Note the "12 Amazing ports of call!". (Rear quarter view)

The Tour Bus on the Rockstar Games Social Club.

The Tour Bus on the updated Rockstar Games Social Club.