• ­Find Zhou Ming's boat before it reaches the dock.

• ­Watch out - the boat is armed with sea mines. Avoid them, or destroy them with torpedoes.

• ­Don't let the van get away with the shipment.

• ­Destroy the van and its occupants.

So Near, Yet Sonar

Heston: " We need to sink Zhou Ming's contraband boat for him."
Huang: "Are you insane? Or back to skag? If I'm caught attacking Triad shipments, my life is over!"
―Wade Heston gives Huang Lee a job

Torpedo Run is a mission given to Huang Lee by Wade Heston in Grand Theft Auto: Chinatown Wars.

Wade's associate at the FIB knows the informant who is located within the Triads. Heston will give Huang the informant's name if Huang performs some work for him. Heston wants Huang to destroy one of Zhou Ming's contraband boats.

Head to the LCPD Dock port close to where the mission begins to find and steal a Destroyer, sail towards Zhou's boat and sink it using the Destroyer's torpedoes. However, if the player gets too close to the boat, the sailer will shoot at the player with an SMG. The boat is also equipped with sea mines, which the sailer will occasionally deploy. The mines can seriously damage the player's boat if they are within range, but Torpedos can neutralize them if they hit. Once the player has successfully destroyed the boat and the shipment quickly, Wade will send an e-mail telling Huang that some of the cargo managed to reach the shore and is being transported by road. Head to the pier west of Colony Island. Enter the nearby vehicle and chase the van containing the shipment. Once the van has been destroyed, the mission is complete.

"Heston's FIB contract will give us their informant's name if we do some of his dirty work.

So, I chased down some contraband being brought in by Zhou's men.

If Zhou ever finds out I sank his boat I'm gonna be in deep shit." 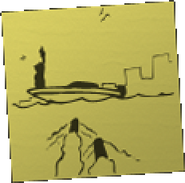 Torpedo Run
Add a photo to this gallery 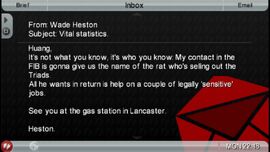 Heston sends an e-mail to Huang telling to meet him at the Terroil gas station in Lancaster. 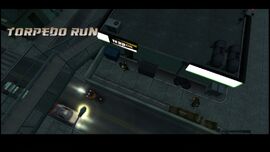 Arriving at the gas station. 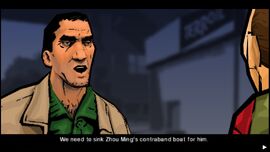 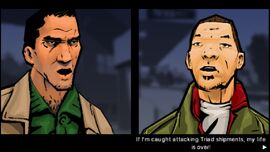 Huang tells him if he get caught attacking the Triads shipment he will be killed by Hsin. 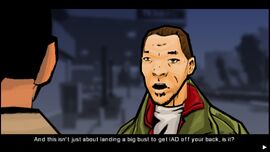 He also asks if this is just about to get the IAD off his back. 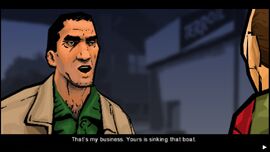 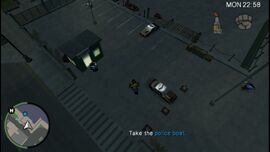 Going to the police jetty to steal a police boat. 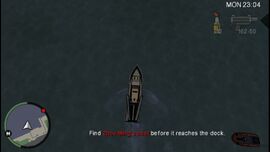 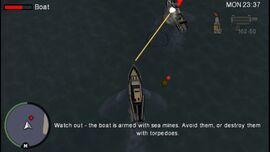 Zhou's boat is equipped with sea mines, which can seriously damage the player's boat. 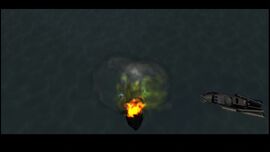 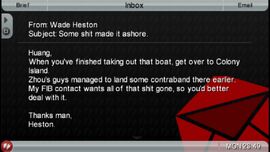 Heston sends an e-mail telling Huang that some of the cargo managed to reach the shore and is being transported by road. 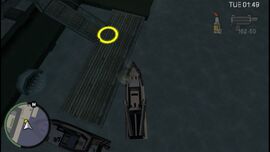 Arriving at the pier in Colony Island. 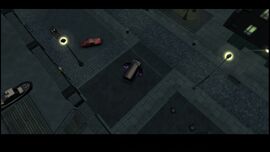 Zhou's contraband being transported in a van. 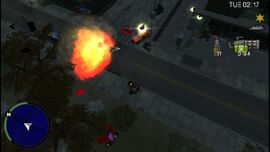 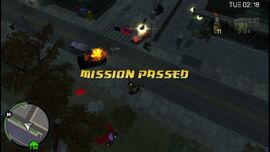 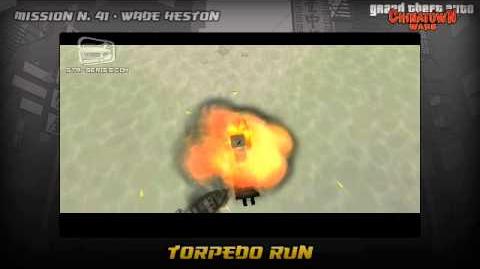 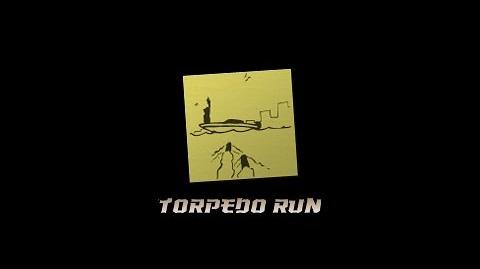 In 2015, Android users were faced with a bug which made it impossible to shoot the torpedoes. As of 2018, the bug has been fixed.

Retrieved from "https://gta.fandom.com/wiki/Torpedo_Run?oldid=1320284"
Community content is available under CC-BY-SA unless otherwise noted.