“What do a 23rd Century hypercar and a family-friendly SUV have in common? More than you might think. They both turn you into a leadfooted, tailgating sociopath the moment you touch the gas. And they both do roughly the same miles per gallon as a burning oil well. With all that shared DNA, it was only a matter of time before someone left them in a dark showroom to see if they would breed – and the Toros is the result.”
— Legendary Motorsport description.

The Pegassi Toros is a luxury crossover SUV featured in Grand Theft Auto Online as part of the continuation of the Arena War update, released on December 18, 2018, during the Festive Surprise 2018 event.

The Toros is based on the 2018 Lamborghini Urus, with the side windows derived from the 2018 Audi Q8 and the tail lights influenced by the Lamborghini Aventador.

The Toros features a large, bulky profile typical of an SUV, yet featuring sporty elements that gives the vehicle some similarities with various Pegassi sports cars. The lower front is largely predominated by a black section spanning the entire width of the vehicle, with a trapezium shape on the centre that is about half the vehicle's width. The area above the black section is predominated by a large central grille with the shape of a squashed hexagon and having about the same width as the lower trapezium intake, together with smaller outer intakes with the shape of irregular pentagons and placed in a lower height than the main grille, creating inset curvatures above them. Above the flat side of the grille, the car has a slanted panel with the Pegassi logo on the centre, while the sections beside it are occupied by dual high-beam lamps with modern strips on the separations and small turn signals on the outer edges. The bonnet has two long vented ridges on it and opens to reveal black sections around the engine bay, while the base of the windscreen is finished in carbon fibre.

The sides of the vehicle feature black portions on the wheel arches and on the middle section of the body, the latter having trapezoid shapes and a gray/silver line above. There are various impressed formations around the doors, with the lower ones parallel to the aforementioned gray/silver line. The car's doors are frameless and are rather large in size, it also features carbon-fibre lines denoting the handles. The cabin area makes use of black finish around the side windows and the inner separations, while body-coloured mirror wings are seen near the A-pillars, mounted over black frames. The roof has a slightly impressed formation almost spanning the entire width, while a roof spoiler can be seen above the slanted rear window.

The rear of the car consist of a small lip spoiler and a concave section on the upper side, where the outer edges have numerous tail lamps separated by red light strips and the central panel bears the Pegassi logo. The middle section consist of an inset portion with the license plate on the centre and vertical exit vents on the edges, with what appears to be the seam for a rear compartment door. The lower area consist of a light gray bumper with carbon-fibre lines around the rear vented section and the large rounded exhaust tubes, as well as a black bottom diffuser with four blades on the central area.

The interior of the vehicle is shared with the Tempesta, itself being a derivative of the one used in the FMJ. However, it was altered to fit into the four-door layout. The steering wheel also bears the Pegassi logo on the horn cap.

The primary colour of the vehicle is applied on the bodywork, while the secondary colour is applied slightly above the gray/silver line and the rear-view mirrors. A trim colour is also available for the interior stitching. The vehicle reuses the same rim design as the Tempesta, and part of the spokes can also support a dedicated colour (although this is only present on naturally-generated examples).

The Toros is an SUV that has an incredible engine power, much like the real world counterpart. It has good acceleration and a very high top speed, to a point it can rival some high-end sports cars like the Schafter V12, the Z-Type, the XA-21 or even the Adder in drag races, where top speed is vital. Having said that however, the Toros has poor traction and braking. Additionally, it has the third Advanced Flag enabled.[1] This is the specific flag that hardens the suspension, causing cars to bounce more excessively over bumps or curbs than usual, resulting in unpredictable behaviors. Also due to this, curb boosting affects the Toros further than fellow cars like the Huntley S and XLS, as the suspension is more sensitive, therefore more easily to compress. In addition, it still handles like an SUV.

The Toros is powered by a V12 engine, which bears a similar model to cars like the Infernus Classic and the Torero. It is coupled to an 8-speed gearbox in a Front engine, all wheel drive layout (40% front, 60% rear distribution). The vehicle bears a high-revving and roary engine sound, appearing to be a combination of the Cheetah and Adder engine sounds. 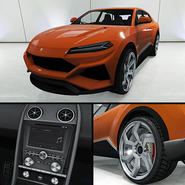 The Toros on Legendary Motorsport.

The Toros on the updated Rockstar Games Social Club.

The Toros in the cinematic preview on Rockstar Games Social Club. 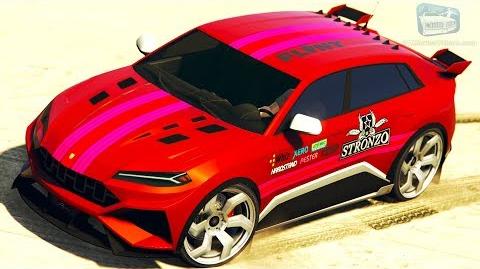