“From the Italian lakes to the Vespucci, Los Santos canals - experience a level of refinement that only blood money can buy: timber from protected rainforests, six inch lacquer finishing, and twin v12 engines that can cold-press juice a blue whale. This level of balls-out hedonism would be grotesque in a supercar but it's somehow acceptable in a super speedboat... right?”

The boat is mainly based on the Riva Aquarama Lamborghini. It has a similar appearance to the Speeder, sharing the initial wooden long design. It appears to include mounted lighting with a two-tone coloured wood design and chrome lining finishing the edges, window pillars and frames, as well as around the engine bay window. The Toro also has a unique horn sound and a deep engine noise with it. The rear of the boat has the Lampadati label as well as a custom 'Toro' badge embedded on the wooden panels, the Toro's badge is also engraved onto the steering wheel.

The boat has two large in-board V12 engines with double-barrel carburetors, visible through a small glass panel in the rear of the boat. The boat has slow acceleration and an average top speed. The boat is very powerful, and can barge past many smaller boats. The weight of the engines means the vessel is easy to get up on a plane and pulling the trim control back can result in the majority of the hull surface breaking contact with the water. Racing-wise, however, the Toro is easily outclassed by other faster boats.

A Toro seen in an official screenshot.

The Toro on the updated Rockstar Games Social Club.

The Toro in the cinematic preview on Rockstar Games Social Club. 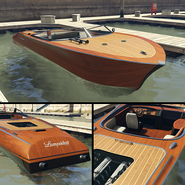 A special version of the Toro appears when purchasing the Aquarius Yacht in Grand Theft Auto Online, added as part of the Executives and Other Criminals update. It spawns in the colors of the yacht, altering the color of the yacht will consequently alter the color of the boat and any other vehicles that spawns on the yacht. 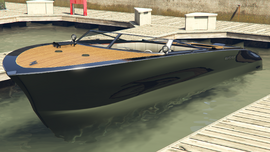