No
“Who can say when the innovative hot rod designs of the 30s and 40s shaded into the grungy rat rod counterculture of subsequent decades? And who can say when that genre was overrun by mediocre welders with endless disposable income mutilating good cars and jacking off to their own edginess in the back seat? What we can say is that this beauty comes with a moist towel as standard.”

The Tornado Rat Rod is a highly-modified, "hotrod" variant of the rusty Tornado, which is seemingly inspired by the custom 1957 Chevrolet Bel Air Rat Rod Wagon built in 2014 by Chris Walker from ITW Hot Rods.

The front clip of the car was completely removed in favour of an extended chassis, featuring a drop-beam aluminium bar with small suspension linkages and two articulated bars connected to the structure, in a similar fashion to the Hotknife and the Fränken Stange. Its front end is fitted with a small bumper with turn signals and two circular headlamps over it. It has a massive engine fitted with high velocity stacks, side exhaust stacks and cam covers bearing "TORNADO" badges. The sides of the car are mostly identical to the Tornado, but the rear fenders were cut in order to fit the large rear wheels. The greenhouse area remains identical in shape and design, as well as the whole rear end. On the underside, the rear axle was lifted and supported by four articulated bars and small suspension linkages.

The vehicle is painted in a single color for the body and a portion of the engine block. It uses a set of wheels consisting of "Dukes" rims with standard-sized treaded tires for the front, and "Five Star" rims with large-sized slicks for the rear, both having a colorable surrounding only seen in naturally-generated examples (i.e. Content Creator). However, switching colors from the custom front wheels may also affect the rear ones, though it will lose its color when the front wheels are reverted back to the default ones.

As with animated primary drives in the motorcycles of the Bikers update, the Tornado Rat Rod features an animated timing belt powering every engine pulley.

The Tornado Rat Rod has good acceleration, although its low top speed may prove a challenge to keep up with faster vehicles from its class, even with upgrades, in races. The rather long wheelbase may also cause lower handling capabilities compared to the standard Tornado. In addition, the large rear wheels are very vulnerable to gunfire, making bulletproof tires a high recommendation.

The Tornado is powered by a hefty big-block single-overhead camshaft V8 with 8 large velocity stack carburetors, in an FMR (front-mid engine, rear wheel drive) layout, laid longitudinally and coupled to a 4-speed gearbox. Its engine sound is shared with that of the Trophy Truck, and the engine start-up is the same as the Fränken Stange. 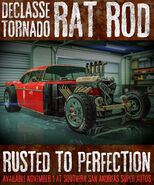 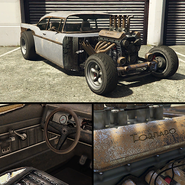 The Tornado Rat Rod in the cinematic preview on Rockstar Games Social Club. 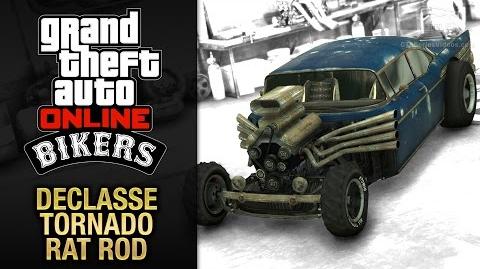