No
“This stylish sportcar’s speed is a daily reminder to take a break from the fast pace of the LS entertainment industry and calmly reflect on its bottomless depravity.”
— Career Builder description.
“You never forget the first time you sit behind the wheel of a mint condition Declasse Tornado: that effortless class, that shameless bulge in your pants or wetspot on the seat, that dawning certainty that you're still going to be crawling up this gentle suburban hill fifteen hours from now. Still, with our help, onlookers will be so floored by your paint job they won't even take a Snapmatic selfie in front of the impressive smoke clouds coming out your hood.”
— Benny's Original Motor Works description.

The Declasse Tornado Custom is a two-door lowrider featured in Grand Theft Auto Online as part of the Lowriders: Custom Classics update, released on April 4th, 2016, during the Tornado Week event.

“You never forget the first time you sit behind the wheel of a mint condition Declasse Tornado.”
— Rockstar Newswire description.

The Tornado Custom is a lowrider variant of the convertible version of the Tornado, where it brings various changes by default.

The vehicle retains its original design from the standard model, retaining the front and rear fascias. However, its roof features a custom pattern detail. Its underside is fitted with a paintable frame and has a visible driveshaft, a different, shorter exhaust setup (dual pipes instead of a single Y-split pipe), and visible hydraulic bars connected to the suspension.

The car is prominently painted in a single color, with the accent color painting the stitching and the details of the interior; and the trim color applied to most of the interior panellings and the soft top. The vehicle retains the stock wheel design from the normal Tornado (being a derivative of the "Flare" rims available in Los Santos Customs), albeit slightly smaller.

The Tornado has received some improvements such as its handling and speed but otherwise remains a less-than-worthy competitor, though it has a somewhat reduced turning circle. Braking power is problematic as it requires the use of the handbrake to make quick stops, even with upgrades purchased.

Again, the vehicle is powered by a V8 engine, emitting the same engine sound. It is coupled to a 4-speed gearbox, powering the rear wheels.

A Tornado Custom in a promo screenshot.

A Tornado Custom with its roof retracted. (Rear quarter view)

The player leaning out of the window.

The Tornado Custom on the Rockstar Games Social Club.

The Tornado Custom on the updated Rockstar Games Social Club.

The Tornado Custom in the cinematic preview on Rockstar Games Social Club.

During the two Halloween event weeks in 2021, a special variant of the Tornado Custom named "Phantom Car", would appear at night during freeroam as one of the random events. The "Phantom Car" is a reference to "Christine", a malevolently possessed 1958 Plymouth Fury that stars in the Stephen King novel and 1983 film of the same name. 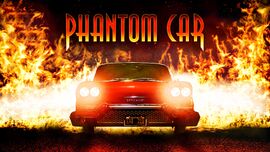 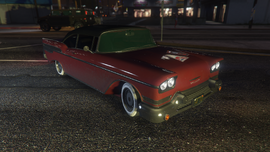 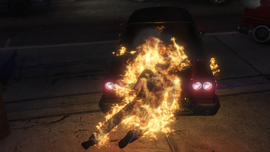 The Phantom Car in attack mode, killing a player.