The Pegassi Torero is a car featured in Grand Theft Auto Online as part of the Gunrunning update, released on July 25, 2017, during the Torero Week event.

The Torero assumes a design similar to the Grand Theft Auto: Vice City model of the Infernus, sharing the short body and the rear-mid rear configuration. The front of the car makes use of five thin intakes aligned to each other and two additional vents below these. The upper area contains a set of visible square-shaped lamps on black housings and pop-up rectangular headlamps, along with a bonnet displaying the manufacturer emblem on the front.

On the side profiling, the overall body shape is most noticeable, giving the car its wedged, yet shorter design. The car sports a single strake line which splits air into side intakes leading to the rear brakes, with the upper ones fitted with black fins. On the cabin area, plastic trim can be seen around the windows, while conventional wing mirrors are found mounted just behind the A-pillar. The area behind the side windows feature black slatted intakes and small gills leading to the upper engine bay. The Torero features scissor doors, though they do not extend further out of the body as with the Infernus. In the rear portion, because of the immense engine size and wedge profile of the vehicle, width at this point is most extensive. The vented sections separate to merge with the rear side body panels, leaving ample room for the engine hood cover - a large glass cover. The vehicle sports the same large V12 derived from the Infernus Classic, sharing the same details.

The rear end consists of a body-coloured panel with a black strip on the centre, sporting circular rear lamps similar to the ones on the Infernus Classic, although the inner lamps consist of turn signals with reverse lights on the middle. Below the bumper, a twin exist dual exhaust emerge from the centre.

The Torero's interior layout is unique, where the driver-side dashboard features a rectangular design with blue dials derived from the Banshee, but scaled down and rearranged in a way that the main dials are found between three pairs of smaller gauge clusters and numerous square warning lights on the upper corners and the lower centre. Two air con units are found on the dashboard above the central column, while an airbag cover can be seen on the passenger side. The central column features a radio set and gear stick. The Pegassi wordmark is found on the horn cap.

The Torero only has a single colour, which applies to the entirety of the bodywork. Interior details, such as the seat stitching, seat rear panel, and the horn cap, are also affected by the primary colour. In the files, one of the Torero's traffic default colours assigns a grey colour as secondary (which is not visible), a beige colour as tertiary (which affects the dashboard, steering column, seat inner portions, and the section between the seats) and a light blue colour for the dials (even though the base colour of the Banshee dials is fixed, thus unable to change). This particular colour set can only be seen in Content Creator and may have a slight chance of appearing during the mission Repo - Under the Hammer. The car's rims appear to be a derivative of the ones from the Infernus Classic, featuring five rounded spokes with circular spacing between these, with bolt details on the surrounding and around the centre. However, they have more depth.

The vehicle's overall performance and handling is similar to other classic renditions of sports cars, particularly on par with the Cheetah Classic. The car has agile handling and quick acceleration. The Torero's top speed is particularly high for its type. The car requires intermediate driving though, as the back is quite heavy and tends to fishtail during sharp high speed turns. Furthermore, the Torero is shown to have a rather fragile bodywork, unable to sustain a couple of frontal hits without emitting white smoke, somewhat on par with motorcycles.

In the rear compartment, a V12 engine shared from the Infernus Classic is found, powering the rear wheels through a 5-speed gearbox. Its engine sound seems to be a combination of both the Tyrus and Infernus Classic. 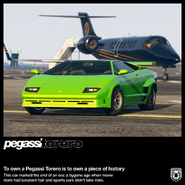 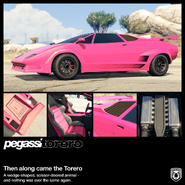 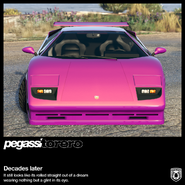 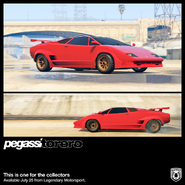 The Torero with its pop-up headlights operational. 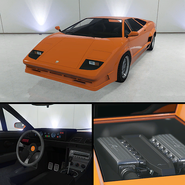 The Torero on Legendary Motorsport.

The Torero on the Rockstar Games Social Club.

The Torero on the updated Rockstar Games Social Club.

The Torero in the cinematic preview on Rockstar Games Social Club.

The Torero in the gameplay of Race and Chase: Street Legal.

Alternative badge used in the adverts. 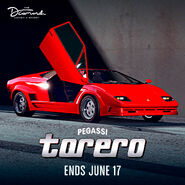 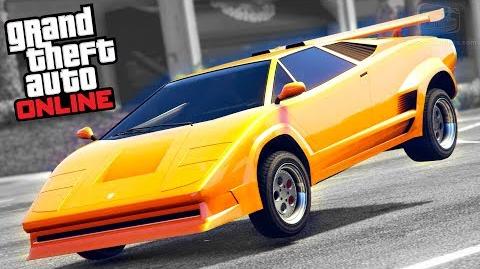