• ­Toreno's boarding a helicopter at a helipad nearby. Get there and stop him.

• ­The helicopter's airborne! Get that rocket launcher to bring it down!

• ­Get on to the freeway and shoot that helicopter down.

Wu Zi Mu: "My men found that van you were looking for, by the helipad Downtown."
CJ: "And Toreno?"
Wu Zi Mu: "Yep, he's there. Apparently he's about to take some merchandise and cut by helicopter."
— Wu Zi Mu tells Carl Johnson that he's located Mike Toreno

Mike Toreno escaped death when Carl and Cesar Vialpando killed T-Bone Mendez and Ryder, but Wu Zi Mu has tracked Toreno down to a Maverick helicopter at the SFPD headquarters.

Carl drives to Downtown and sees Toreno's men guarding the Maverick. Carl kills Toreno's guards and as he approaches the Maverick, it takes off with Toreno on board. Carl collects a Rocket Launcher and/or an AK-47. The Maverick flies off south with Carl in pursuit. Carl shoots the Maverick out of the sky and kills everyone on board.

The rewards this mission are $18,000 and an increase in respect. If the mission The Da Nang Thang is done, then the mission Yay Ka-Boom-Boom is unlocked.

Mike Toreno's escape helicopter about to take off.
Add a photo to this gallery 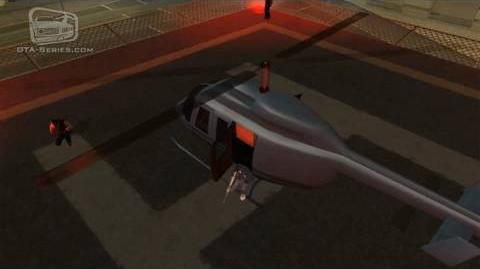 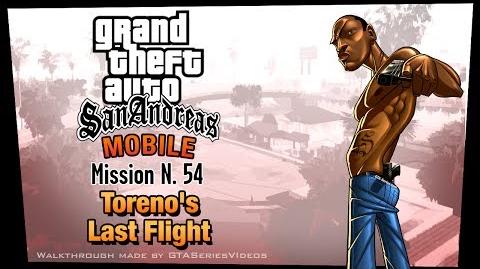 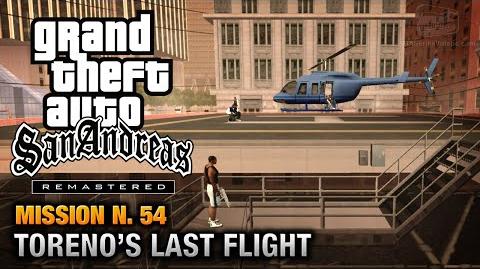 Retrieved from "https://gta.fandom.com/wiki/Toreno%27s_Last_Flight?oldid=1212059"
Community content is available under CC-BY-SA unless otherwise noted.