View source
watch 02:34
Fire Emblem Warriors: Three Hopes - The Loop
Do you like this video?
Play Sound
Not to be confused with Torero, another Pegassi classic sports car.

Standard White - 100%
“No land? No problem. With Pegassi's submersible, booster-fitted sports car, taking your life and all its problems out to sea has never been faster. Nothing is as therapeutic for the soul as the endless blue of the Pacific Ocean and firing off a few torpedoes at passersby.”
— Warstock Cache & Carry description.

The Pegassi Toreador is a custom submersible sports car featured in Grand Theft Auto Online as part of The Cayo Perico Heist update.

The Toreador is evidently based on the Lamborghini Marzal concept car, seen in the wedge-shaped profile, narrow front end, greenhouse area and four door layout, while the headlights draw inspiration from the Aston Martin Lagonda. The car's design also draws minor influences from the Lamborghini Espada and the Lamborghini Urraco.

Depicted as a 1960s style 4-door sports car, the Toreador has a narrow front end, featuring a black plastic bumper with a small lip on the centre. The area below the bumper has a central intake and two rectangular high-beam lamps, while the area above the bumper has a small central panel and a set of four headlamps on the inner sides and two amber signals on the edges. The bonnet follows a slanted profile on the front and features an inset profile leading to a narrow intake near the windscreen, while the manufacturer emblem is seen on the front end.

The sides of the car denote a more luxurious approach, having chrome details running through the sides, along with flared arches on the front and small bodywork extensions on the rear that cover the upper bit of the rear wheels. The most notable feature are the gull-wing doors with lower glass panes, chrome handles that are part of the side details and small rear door intakes, with the lower ones directing airflow to the rear brakes and the smaller upper ones to the engine bay. The greenhouse area is characterized by the glass roof and the seeming lack of B-pillars, featuring chrome trim around the windows and a chrome detail next to the A-pillars. The rear section is mostly occupied by black slatted exit vents that span most of the car's width.

The rear end is generally basic, featuring a slanted profile and a large meshed vent with a dedicated section for the license plate, as well as a silver lettering above it, displaying the car's name. There are also large tail lamp units, consisting of main/brake upper lamps and turn/reverse lower lamps. The lower area basically consists of a black plastic bumper with a similar profile to the front one and the dual-exit exhausts on either side, while the underside is mostly occupied by a carbon-fibre plate.

The interior of the car is almost completely reused from the Gauntlet Classic, making use of an inset driver-side portion of the dashboard and fitted with a wooden backing and chrome trimmings around the panel and the dials. The dials themselves are the same "Dominator" dials prominently used on various classic cars, but are arranged in a way that the main dials are located beside the steering column and the gauges on the centre of the whole interior. Rectangular aircon units can be seen on the passenger side, while the manufacturer emblem is seen on the steering wheel. A Pegassi badge can be also seen behind the rear seats.

The vehicle is distinguished by its ability to switch between car mode and submarine mode, which, just like the Stromberg and the Deluxo, can be transitioned at any time. It features various functional components that do not seem to have fully-rendered storage spaces inside the vehicle; they merely disappear into the car's bodywork when stowed:

The primary colour of the car is applied on the upper bodywork, while the secondary one is applied on the lower/bottom area. A trim colour is also available for the interior, door cards and seats. It has a unique rim design, consisting of five long outer open slots and five smaller inner ones, with the centre being occupied by knock-off hub caps.

The vehicle is armed with two machine guns protruding from the bonnet intake and a set of missile/torpedo launchers hidden behind the central panel, which opens when the launchers are selected.

On car mode, the Toreador seems to have fair handling and speed, but has average acceleration, the latter of which can be improved by upgrading it at Los Santos Customs or at a vehicle workshop. The handling and cornering ability are also fairly good, though the rear-wheel drive layout does make its presence known at times through slippery handling. Being an amphibious vehicle, it will not fail like other land vehicles if left in car-mode when entering water, but will be difficult to control, therefore making it essential to change into the submarine mode. Losing the driver door, however, renders it vulnerable to water, being destroyed in the process like any normal vehicle. The car's windows are shatterproof, although they are not bulletproof. Overall, it performs similar to the Stromberg.

By holding right on the D-Pad, or holding H on PC, the vehicle transitions from car mode to submarine mode in approximately four seconds.

When executing a handbrake turn, the handbrake is evidently weak as the wheels reluctantly lock up to engage the scenario. This is also present with the Ocelot Stromberg where handbrake turning is a task. To counter this, shifting the weight of the vehicle by pendulum to purposely lessen the stability of the rear may be needed.

On submarine mode, performance is average. Forward speed is quicker than a Submersible or a Kraken, but is still slower than any surface speed boat.

Ascent and descent rate is faster than other submersibles but can only be achieved using forward momentum and pitching the nose. There is no raise and lower control functionality as in the other submersibles as these controls are assigned to the weapons in the Toreador. Rudder response is quite sensitive. The car will momentum-drift noticeably when trying to turn sharply under water.

Collision with the seabed or underwater flora will cause damage, and can eventually destroy the vehicle (and potentially kill the occupants depending on the depth this occurs). The vehicle shares the same depth range as other submersibles and will be crushed by water pressure at just past 500 ft (0.11 miles), killing the occupants, even if they are equipped with Scuba Suits.

Visibility when breaching the surface is poor and there is a risk when driving out of the water of the vehicle getting stuck on terrain whereby neither land nor submarine mode will be usable to get the vehicle unstuck. Abandoning the vehicle on foot and getting it redelivered by the Garage Mechanic or pushing it with other nearby vehicles/boats will be required.

By holding again right on the D-Pad, or holding H on PC, the vehicle transitions from submarine mode to car mode in approximately three seconds.

What makes the Toreador slightly superior to the Stromberg is the booster; this booster works similarly to vehicles with booster turbines such as the Rocket Voltic and the Oppressor. It propels the car for about a second and recharges quite quickly at approximately one second, allowing the car to accelerate quickly or maintain speed better than most cars (although it is still inferior to the Vigilante in that aspect). The booster also works underwater, making it superior to most naval vehicles.

If the player owns a Kosatka and has purchased the optional sonar station, their Toreador gains the sonar function when in the water. Pressing the sonar button will reveal the presence of the daily Hidden Caches which can be collected in the Toreador, as well as submerged Kosatkas.

Defence-wise, it takes six homing rockets or two RPG rockets to explode the Toreador, giving it a similar defensive edge to the Stromberg and over the Deluxo. However, it is very vulnerable to close high angle air attacks due to a limited lock-on angle of the homing missile, although still devastating once locked on to an opponent.

The Toreador, like most vehicles with similar design layout, provides slight protection against targets from the rear. Even though the windows cannot be shattered, they offer no protection to the occupants, and the glass roof may render the occupants vulnerable to enemies from above, such as pursuing Police Mavericks.

The driver has access to a set of weapons for both car and submarine modes:

The Toreador on the official artwork of The Cayo Perico Heist update. 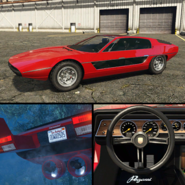 The Toreador on Warstock Cache & Carry.

The Toreador in the cinematic preview on GTA Online Rockstar Games Social Club.