D.B. Cooper
“The Russian mob want me dead, my best friend just contemplated murdering me, the mob are on my case, I'm massively in debt and I just lost 2 million dollars worth of diamonds. Any other man would just dust himself off and carry on.”

— Tony Prince to Luis Lopez in the final mission of The Ballad of Gay Tony, "Departure Time".

“Listen, I love narcissism, I built a career on narcissism, I stare in to the mirror and beat off like a real man, I pose, I preen. But there's a limit here...”

— Tony Prince to Lazlow in the GTA Online Protagonist's Nightclub.

Tony is a nightclub entrepreneur in Liberty City, as well as the owner of both Maisonette 9 and Hercules.

Tony Prince was born in the Midwest in 1958 (although he claims to have been born in 1963) and grew up in Dukes. According to the Maisonette 9 website, "as a young boy, he wandered to the Humboldt River and dreamed of living on the other side (in Algonquin) so he would no longer be considered bridge and tunnel". He also used to play in front of the Monoglobe and would sometimes stare into it, wondering what life was like in different countries. He is ashamed of his Dukes background, and it's hinted during the beginning of Departure Time that he doesn't speak to his parents anymore. He says, "In my day, gay guys used to be lonely, needy, and lost. Now, they're all in relationships!"

Tony would have gone to college as early as 1975 though he did not focus on his studies. His first experience working at a nightclub came from being in the cloakroom and eventually the front door of Elephant in the mid-1980s until a fire caused it to shut down. The first club Tony opened for himself was PUDDLE, a rave venue famously located in a converted mortuary, until it was shut down when Tony was arrested for tax evasion in 1985, spending 3 months in jail. According to Luis, Tony also first earned the nickname "Gay Tony" in 1985 - as the nickname suggests, Tony became openly homosexual by the time he was 27.

According to the Maisonette 9 website, Tony's next club (and first gay club) was Thunder in 1986 which was later renamed 2 Backed Beast and was eventually shut down by the city. At the height of his career, he also owned the clubs Peacock, Platonic Fury, and Cox. In 1996, he was arrested for possession of cocaine. After the failure of 2 Backed Beast, he opened Hercules in 1998. The following year, he got in trouble with the police for "public lewdness". Sometime between 1998 and 2003, the counterpart straight club in Tony's portfolio, Death By Machines also burned down, after which point Tony was briefly banned from opening new venues.

In 2003, his hiatus ended and he was allowed to open Maisonette 9, but still came under heavier scrutiny for his club's policies on safety, age-checking, and drug use.[1] Sometime after opening the club, he met Gracie Ancelotti, a mob daughter who once failed to get inside Maisonette 9, but was granted a membership after befriending Gay Tony (as Gracie tells Niko Bellic in "I'll Take Her"). Gay Tony would later be heavily in debt to her father.

In 2005, Gay Tony hired Luis Lopez as a doorman and bouncer for Hercules. They quickly form a father-son-like relationship (Luis having been abandoned by his father, and Tony being unlikely to ever have children due to his age and orientation), although Tony later admits to Luis, "I only hired you because I thought you were dumb." Gay Tony had been dating a yoga instructor long-term before meeting his boyfriend Evan Moss. Gracie and Evan first got him hooked on painkillers and cocaine, according to Luis, and by 2008 Tony had been to rehab five times. He also gained world-famous heiress Cloe Parker as a best customer and casual friend. Like Gracie, Cloe uses a lot of cocaine and influences Tony down a similar path. Tony once confides in Luis during I Luv LC, "Oh my god, 45 years old and I get my kicks doing blow with 17 year old kids whose only claim to fame is that people know better what their vagina looks like than their face. I should be sent to prison, shouldn't I?" Despite minor legal and personal trouble Tony is said to be the 20 year reigning king of Liberty City nightlife.

Luis must work for Tony's loan sharks, Rocco Pelosi and Mori Kibbutz. Because of his debt Tony is interested in selling off Maisonette 9, sometimes even resorting to fraud (such as pretending to sell the club to two people at once, and briefly considering setting up a Ponzi scheme). Luis works on the side for two men, Yusuf Amir and Ray Bulgarin, who Tony considers serious potential buyers because of their extreme wealth. However, Luis hides this from Tony and goes so far as to lie to Tony about his activities at least twice.

Tony sees a last chance to pay off his debts in buying and selling some $2 million diamonds for a small profit. When Luis, Tony and his boyfriend Evan go to buy the diamonds from a cook at the Platypus, they are all ambushed by the Lost biker gang, resulting in the death of Evan (who Luis instructed to go a separate way and stash the diamonds at Maisonette 9). Before this, Gracie and Evan had gotten Tony back on drugs. Shortly after, Luis manages to recover the diamonds after he ambushes a deal between Johnny (who ambushed them), Niko and Isaac Roth. He meets Ray Bulgarin after this event, who later claimed that Luis and Tony conspired against him by buying the diamonds - by chance, the cook had stolen them from him. He executes the cook, then sends a team of assassins after Luis, who manages to escape. Gracie Ancelotti is kidnapped soon after, and the kidnappers demanded the diamonds back from Giovanni Ancelotti in exchange. Luis and Tony safely exchange the diamonds for Gracie, which resulted in Tony losing out on $2 million but apparently remaining at peace with the Ancelotti family. However, during the resulting shootout, the diamonds are thrown onto a passing truck, and thus both parties leave empty-handed. Bulgarin successfully persuades Ancelotti to have Tony killed, who ironically chooses Luis as the one to shoot Tony in exchange for his own life. Luis briefly considers shooting Tony before turning the gun on Rocco (shooting his uncle, allowing Rocco to flee because of his connections). Within minutes, Bulgarin's men ambush Maisonette 9 in hopes of killing Luis and Tony, which they fail to do after a violent shootout. Finally, Luis destroys a shipment of heroin during a bloody shootout at Funland, kills Bulgarin's right-hand man and, with the help of Yusuf, makes it to the airport and successfully kills Bulgarin, blowing up his private jet before it leaves the country. Afterwards, Luis and Tony meet at the Monoglobe with Yusuf and celebrate their victory. Shortly before their meeting, a hobo found the lost diamonds in a trash can, and ran off, laughing gleefully.

Events After The Ballad of Gay Tony

Tony may or may not have finally sold Maisonette 9 to Yusuf Amir, who sought to franchise it all over the world, even in Pakistan and on the moon (saying he was quite serious about this). Tony tells Yusuf that "the club is all about the people," and after Yusuf expresses apathy by saying, "You can whip out your dick and piss on them!" Tony instead tells him that he would be very qualified to own the club.

After The Ballad of Gay Tony is complete, Tony cannot be contacted further. He often spoke of his intentions to move to an extremely secluded getaway spa town, saying his life in Liberty was too stressful.

There are two notable references to Tony in Grand Theft Auto V. The first most recognizable reference is in Downtown Vinewood at the club Pitchers, as the logo is shared with his nightclub, Hercules. The second (less noticeable) reference is near the television set in Jimmy's Bedroom, in the De Santa Residence. A magazine called "Residue" lists off various interviews on the front page, with Tony Prince's being second. It states; "Tony Prince, The Ace of Clubs talks." This may suggest that he is involved in some form or another in the nightclub trade. Although the same magazine is seen in Luis' Apartment.

“I'm not such a savvy investor... I was going to open up a chain of venues... only that's all gone to shit... again... but head over to foreclosures.maze-bank.com, and buy one out of foreclosure... I can open you the best nightclub in the whole state. Any of them. Seriously.”

By 2018, he moved to Los Santos and planned to open a chain of ten new clubs. That deal fell through somehow and all ten sites ended up under foreclosure sale. With help and investment from the GTA Online Protagonist, a club is purchased and opened and Tony continues supporting them to run a Nightclub Business with the help of Lazlow Jones and English Dave.

As the player manages their Nightclub, Tony comes into contact with DJs who help raise the popularity of the club, such as Solomun, Tale of Us, The Black Madonna and Dixon. Tony also sets the player on their own missions and tasks to increase the club's popularity and takes a 10% cut on the money laundering operations of the nightclub warehouse.

Gay Tony's influence over the Liberty City nightclub scene is mostly reminiscent of Peter Gatien, owner of the Limelight and other clubs. Like Prince, Gatien faced drug (1996) and tax evasion (1999) charges and owned several nightclubs geared towards different crowds as investments. Unlike Prince, Gatien is a happily married heterosexual, and having been born in Canada, he was deported there after his drug charges and currently lives in Toronto.

Many elements also seem to have been taken from Steve Rubell, the late owner of the legendary Studio 54. Both got their start in Queens, New York City (Dukes, Liberty City being a parody), and faced club raids and tax evasion charges since their early years of success. Their business models were also very similar, including a strict, trendy dress code (which Rubell would sometimes enforce personally). Both were homosexuals and habitual drug users, although Rubell kept it a secret, got diagnosed with AIDS in 1985 and died of hepatitis in 1989.

He also bears some similarities to Miami club owner Chris Paciello who, like Tony had connections to New York Mafia families and had one of his famous clubs burn down only to open another club later the same year. Paciello is also straight, however, and is most famous for once having dated Madonna.

NOTES
- Nightclub entrepreneur believed to have links to organized crime, particularly the Ancelotti Crime Syndicate, though the DA's office has not managed to make any of the charges stick.


- Often seen in the company of Gracie Ancelotti, daughter of the Crime Syndicate's head.
- Recent raids have taken place to check the safety standards and underage admittance policy of his Algonquin clubs - Hercules and Maisonette 9.

Game art of Tony Prince in The Ballad of Gay Tony. 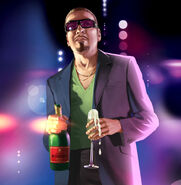 Alternate game art of Tony Prince in The Ballad of Gay Tony. 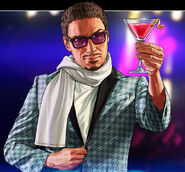 Artwork of Tony Prince in GTA Online: After Hours DLC

Tony Prince on the phone in his office at Maisonette 9.

The Beta model of Tony.

Tony getting aimed at by Luis Lopez. 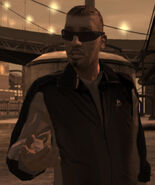 Tony Prince in GTA IV, during "Diamonds Are a Girl's Best Friend". 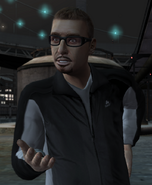 Tony Prince in the same scene in The Ballad of Gay Tony, during "Ladies Half Price".