In 2001, Toni still working with his mother and is frequently been seen in his family-run restaurant, where he provides Claude with jobs. The constant insulting from his mother about him not being able to be like his father and failing to meet up to her expectations had forced him to call the local chat radio station, Chatterbox FM, and complain about his mother's constant berating. After Salvatore Leone has been assassinated, it is believed that Toni will take control of the Leone Family simply because Joey Leone, Salvatore's son, hasn't exactly done much to help the family.

Toni's behavior in scenes of the game suggest that he is very loyal, but very easy to irritate (of course, this may be in part of that he is surrounded by such strange people, for instance, Maria Latore, Joseph Daniel O'Toole and Donald Love). When he is angry, Toni is capable of practicing extremely violent acts (like using an axe to kill Giovanni Casa and cut his body into small pieces), but he also seems to feel remorseful at times (like when he goes to the Cathedral to make a confession). However, like many other GTA protagonists, he too shows very little hesitation in killing anyone standing in his way and occasionally mocks them. Toni also believes that people should show proper respect to their parents, as seen in the mission Hot Wheels when he berates Vincenzo Cilli for receiving oral sex from a prostitute named Cheryl while talking to his mother, and how he desperately tries to please his mother. Like Claude, he will give drivers the finger if a vehicle stands in front of him and tries to mow him down.

Toni seems to be very loyal to his bosses (for example, he saves Salvatore from being crushed in a car which the Sindaccos used to kidnap Salvatore). However, after completing the story-line mission "The Sicilian Gambit", during the ending cutscene, Toni seems to be a little troubled and hesitant for not being paid by Salvatore the couple of million dollars he promised. 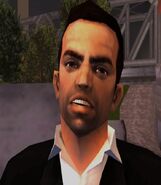 Retrieved from "https://gta.fandom.com/wiki/Toni_Cipriani?oldid=1101275"
Community content is available under CC-BY-SA unless otherwise noted.