Tone appears on the official website in the customer testimonials [1] for Tattoo Parlors titled "Hall of Shame".

According to his testimonial, it is revealed he only goes to Ink Inc. to get tattoos at the cheapest price.

There is a pedestrian in Strawberry that resembles him who can be rarely found outside the Gas Station on Grove Street in the early stages of the game. He may talk with Franklin and Lamar when they are together. He is heard saying, "Yo, what's up Lamar?" and "How's it going, Franklin?". Franklin cannot talk to him further however. 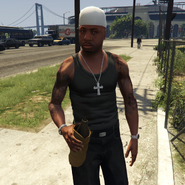 The NPC model in game on Forum Drive.
Add a photo to this gallery

Retrieved from "https://gta.fandom.com/wiki/Tone_Sampson?oldid=1165372"
Community content is available under CC-BY-SA unless otherwise noted.