"Yeah, my old man used to work on these. I used to spend the evenings with him cleaning the rollers. I was gonna follow him in his trade but... I lived a different life."
―Tommy Vercetti

Tommy is a former member of the Forelli Family, and the leader of the Vercetti crime family in Vice City.

Thomas Vercetti was born in Liberty City in 1951. His father worked in a printing shop and as a child, Tommy used to clean the rollers with him. Tommy had planned to follow in his father's footsteps, but, in his own words, "led a different life". Dialogue spoken by Tommy while fighting indicates that he had a bad relationship with his mother.

Sometime prior to 1971, Tommy joined the Forelli Family. He continued to work with the Forelli Family, making his way up the ranks and presumably becoming a made man. In 1971, Sonny Forelli, growing apprehensive of Tommy's increasing power, attempted to set up an ambush for him, under the guise of a hit in Harwood. However, Tommy not only survived, but also killed all eleven men that were sent to kill him. He was arrested and convicted of eleven counts of murder. Tommy was sentenced to death for the murders, but since he kept quiet and turned no evidence on the Forelli Family, Sonny Forelli used judicial connections to commute the sentence. Tommy remained in prison for fifteen years, refusing to divulge any Forelli Family secrets to the LCPD. He was nicknamed "the Harwood Butcher" by the press.

In 1986, Tommy was released from prison after Sonny "pulled some strings". Fearing that Tommy is "too well known" in Liberty City, and also wanting to expand into the drugs trade in the south, Sonny sends Tommy to Vice City. Tommy flies to Vice City along with Harry and Lee, meeting Ken Rosenberg at the airport, before immediately driving to a drug deal at the docks. The drug deal turns into an ambush, and Harry, Lee, and one of the drug dealers are killed. Only Tommy, Ken, and the other dealer escape the attack.

Tommy informs Sonny of the ambush and is reminded that Sonny is "not a man to be screwed with"; Sonny makes it clear he wants his money and his drugs back. Tommy initially works for Ken, starting riots and intimidating jurors. While working for Ken, Tommy also meets Lance Vance, the other dealer, who seeks revenge for his brother who was killed during the initial drug deal. Tommy also works for Juan Cortez, an intermediary for the drug deal, who begins to look into the ambush for Tommy. Meanwhile, Cortez has Tommy steal missile technology chips and kill Gonzalez, who had talked about the deal.

Cortez, believing that Ricardo Diaz was responsible for the ambush, asks Tommy to act as protection for Diaz in a deal with the Cubans. The Haitians, enemies of the Cubans, ambush the deal but are killed by Tommy and Lance. Diaz, seeing potential in Tommy and Lance, hires them to kill gang members who were stealing his money and steal the fastest boat in the city in order to purchase drugs from a dealer on a boat. Lance eventually attempts to kill Diaz for the death of his brother, but is captured by Diaz's men, though he is later freed by Tommy. The two subsequently go on to take revenge, killing Diaz in his own mansion.

The death of Ricardo Diaz brings change to Vice City, allowing Tommy and Lance to step in and continue the crime ring established by Diaz. Tommy, however, begins to look beyond the protection rackets established by Diaz and purchases a number of businesses around the city, most prominently the Malibu Club, the Cherry Popper Ice Cream Factory (a front for a drug running business), InterGlobal Films and the Print Works. After purchasing each business, Tommy helps establish their influence in the city. During this time, Tommy also begins to work for a number of smaller time criminals in the city, including the Cuban leader Umberto Robina and the Haitian leader Auntie Poulet (due to her drugging him), helping both sides attack the other. He also works for Avery Carrington's real estate business, Phil Cassidy's gun running business, Mr. Black's hitman business, Mitch Baker's biker gang, and Kent Paul's management of Love Fist. Tommy also went on to help Juan Cortez escape the city when the GIGN assault his yacht for the missile technology.

Sonny Forelli, growing restless and impatient, sends some of his men to collect some of his money from Tommy's businesses. Tommy kills the collectors, although not in time to save Earnest Kelly, the owner of the Print Works, from being injured. Tommy decides to give Sonny fake money printed at the Print Works. Tommy meets Sonny in person at his estate to give him the counterfeit cash, but Sonny informs him that Lance has sided with him, betraying Tommy. A gun battle ensues, with Tommy killing both Lance and Sonny, who also confirms Tommy's suspicion that he was set up in Harwood. Following the deaths of Lance and Sonny, Tommy and Ken taken over, becoming the most powerful men in Vice City.

Tommy Vercetti continued to run the criminal underworld of Vice City after 1986; during that time, Tommy's relationship with Ken became increasingly strained due to Ken's cocaine addiction. Tommy eventually got Ken into rehab at the Fort Carson Medical Center in Fort Carson, San Andreas. Although Ken completed rehab and got clean of his addiction, Tommy refused to speak to him following this and essentially cut all ties.

Tommy is mentioned by Ken in the mission The Meat Business in Grand Theft Auto: San Andreas, leading Carl Johnson to question, "Who the fuck is Tommy?" Rosenberg also calls Vercetti at the introduction video of the aforementioned game, Tommy's secretary answers and tells Ken that Tommy is not taking calls, this is the moment where Rosenberg discovers that Vercetti was ignoring him.

Tommy is also mentioned in Kent Paul's website under the list of social problems, saying, "(see, Tom, I didn't mention your name, nowhere. Maybe you won't get us killed now, okay?)" This could mean that Tommy is still alive and in power during the early 2000s.

Tommy Vercetti is depicted as both intelligent and temperamental. He is easily angered and quick to resort to violence. He does not hesitate to kill, though many of his victims are trying to kill Tommy, or have done something that guaranteed their deaths. However, Tommy often shows care and sensitivity towards characters like Mercedes Cortez and especially Earnest Kelly, viewing Kelly as a father figure due to his own father working in a print works, and showing anger and concern when Kelly is injured by Sonny's hitmen.

Tommy prefers to perform his own work rather than delegate tasks to others. Even after he has his own gang and other subordinates working for him, he usually puts his plans in motion personally. He also personally gets involved if things aren't going as well as he'd like - for example, in the opening cutscene of Bar Brawl he is irritated by Lance's lazy attitude towards the bar refusing to pay protection money and immediately goes out to settle things himself.

Despite his hot temper, Tommy tends to be loyal and trusting, especially toward those whom he feels helped him to achieve his goals. He went back to work for Sonny Forelli after being released from prison even though he strongly suspected that Sonny set him up. This is especially true of Lance Vance. Although Lance's competence was declining and his temperament was becoming negative, Tommy still viewed and attempted to treat Lance as an equal partner, even letting him in on the counterfeiting setup at the Vice City Print Works. When busting Lance's chops once over the phone, Tommy states he's doing so because Lance screwed up: if Tommy ever messed up, he considered it within Lance's full rights to take him to task on it. Tommy was shocked at Lance's betrayal, leading Earnest Kelly to quip, "Tommy, for a raging lunatic, you sure are naïve".

Tommy, an Italian-American, is portrayed with a tall, swarthy, handsome appearance, combed dark brown, almost black hair, brown eyes, and a constant five o'clock shadow. He first appears wearing a light blue-green Hawaiian shirt with dark blue palm trees printed on it, a gold pearl necklace around his neck, a gold watch around his left wrist, and a pair of blue jeans and white sneakers. He has other outfits also, and his appearance can be completely changed through the Player Skin Setup, a new feature of Grand Theft Auto: Vice City, allowing players to create custom textures for the default player model and apply them in the game.

Tommy Vercetti shows many characteristics in common with Tony Montana, a drug lord from the film Scarface. The two both end up in exile, both arrive in the city wearing Hawaiian shirts, both rise to power in Miami using great amounts of violence, both build an empire from a large estate and mansion, both have short tempers and are prone to violence, both work as contract killers, and both killed their collaborators and took their ex-bosses' empires. The interior of the Vercetti Estate is even modeled after Montana's mansion, save for the lack of an indoor pool. There are, however, key differences, most notably that Tommy did not become addicted to his own narcotics (he even politely turns down alcohol offered during business meetings) and that Tommy survived the shootout in his mansion, as opposed to Montana who was killed, and Tony Montana is of Cuban descent, whereas Tommy Vercetti is of Italian descent.

Tommy Vercetti also bears some resemblance to 'Mr. Blonde' from the film Reservoir Dogs, played by Michael Madsen who also voiced Toni Cipriani in Grand Theft Auto III, protagonist of Grand Theft Auto: Liberty City Stories. The film sees 'Mr. Blonde' released from prison after loyally doing time for his crime family, as Tommy did after the "Harwood Incident". Tommy later performs contract killings for a 'Mr. Black', whilst he is referred to as 'Mr. Teal' (a reference to the then deceased Leo Teal). He also has a small resemblance to his own voice actor Ray Liotta.

Tommy Vercetti's story is extremely similar to famous real-life mobster Joseph Iannuzzi. In the 1980's Joseph was sent to Florida to be a representative for his mob boss Tommy Argo. Like the relationship between Tommy and Sonny in game, the relationship between Joseph Iannuzzi and Tommy Argo became strained over a large sum of money. When Joseph was forced to flee Florida with a large sum of Argo's money. As a result, Argo ambushed Joseph in Florida and nearly killed him.

This is Tommy's dialogue during free roam. 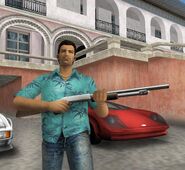 "Save it for a rainy day"

The iconic scene of Tommy Vercetti speaking to Sonny Forelli after the deal.

Tommy talking to Cortez in the mission Mall Shootout.

Tommy Vercetti from behind.

Tommy donning the Soiree suit.
Add a photo to this gallery

Early concept artwork for Tommy Vercetti, showing a similar hairstyle to that used in-game.
Add a photo to this gallery

Retrieved from "https://gta.fandom.com/wiki/Tommy_Vercetti?oldid=1204052"
Community content is available under CC-BY-SA unless otherwise noted.