Unknown
“If there's one thing that I hate more than fat people and cripples, it is poor guys.”
— Tom Rivas in Out of the Closet

Tom Rivas was born in Puerto Rico in 1982. He has two cousins, Lyle and Victor. At an unknown point in time, Rivas moved to Liberty City, and came out as gay. His nickname is "French Tom", which he uses as his username for his account on Love-Meet.net.

By 2008, Rivas was in debt to Brucie Kibbutz. When Kibbutz tried to retrieve his money, Rivas went into hiding. In order to lure him out, Brucie and Roman Bellic set up a fake Love-Meet account for Niko Bellic which depicted him as a rich gay man who enjoys spending his wealth on his boyfriends. Tom agreed to meet Niko at The 69th Street Diner, where, after some awkward conversation, Niko killed him.

During the conversation between Niko and Tom, Tom mentions that the Maisonette 9 and Hercules nightclub owner Anthony "Gay Tony" Prince is actually completely broke, which plays a large part in the story of The Ballad of Gay Tony. 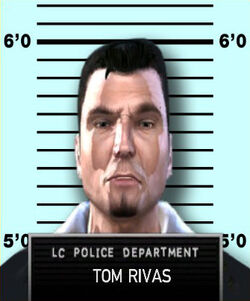 WANTED FOR
Soliciting an Officer

Niko and Tom's date at The 69th Street Diner. 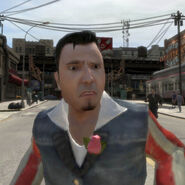