Bell: "Look, I don't ever assume something's gonna go down easy, without any trouble. That's what keeps me alive and outta the pen. We'll see when we get there."
Niko: "So as long as we don't see any helicopters, vans, suspicious gardeners talking into earpieces, if none of that's going on we're OK?"
Bell: "Yeah, you fucking laugh. Laugh all you want."
— Phil Bell and Niko Bellic as they head to Westdyke to pick up the Heroin

To Live and Die in Alderney is the final mission in Grand Theft Auto IV given by Phil Bell to protagonist Niko Bellic. It sees Niko and Phil finally offloading the truckload of heroin they stole from the Triads earlier in the game (in the mission Truck Hustle). However, the operation does not go smoothly; the FIB is watching the house where the drugs are being stored and soon move in to arrest everyone involved.

Phil says it's time to shift the heroin that Phil's nephew Frankie has been "sitting on". Niko drives Phil Bell to the old mansion in Westdyke. FIB agents and law enforcement surrounds the house just as the group are about to leave. Bell calls Frankie an idiot because he let the FIB spy on the heroin.

Niko, Frankie, and Bell open Frankie's garage and get into two separate black cars loaded with "horse". Niko and Frankie follow Phil on a wild chase throughout Alderney, eventually abandoning their cars and switching to a van Phil left behind the hospital.

Niko drives Phil Bell and Frankie Gallo to Pizza This... in Westdyke, where they separate and enjoy their cut of the money.

When you meet Phil at the depot he's beset with paranoia. He asks Niko to help him collect the heroin from the abandoned mansion in Westdyke and transport it to a more secure hideout. It would be a good idea to call Dwayne and ask him to send some backup before you get to the mansion, as this will make the mission a lot easier when being chased by the cops. Once you get to the old mansion, Frankie, a nephew of Phil, then puts the "horse" in two bags into two black Washingtons. Niko and Frankie get into one car, Phil in another. A swarm of FIB officers arrive. Quickly, set off and stay behind Phil as he drives. Be wary of cops that attempt to block your path.

During the drive, Frankie explains why the feds were there. He has been struggling to help his sister financially with getting through college, while also having to look after his sick mother. Niko tells him to shut up, and keep the cops away from Phil. Halfway through the chase, Phil decides to ditch the cars in an alleyway. When you stop, grab the heroin and pull out some firepower. Eliminate any cops that are unlucky enough to get in your way; your party will not move if there are too many officers in the vicinity. After a short foot chase, the gang notice a police helicopter chasing them. Use a rocket launcher to take out the chopper. At this stage, Frankie might die but you won't fail the mission. If Frankie gets killed, the player must pick up the heroin that Frankie was carrying.

Get into the van and lose your wanted level. Once you're home free, take Frankie and Phil to the pizza place in Westdyke. 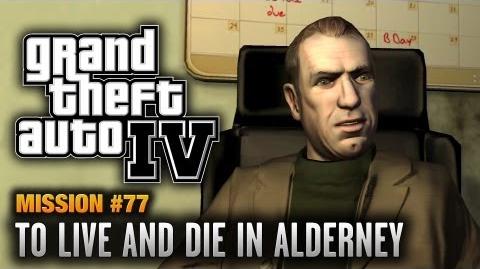