• ­Only one player is left alive.

"Reminisce about the good old days while you hysterically race to avoid bursting into flames in Tiny Racers, the new retro-styled Adversary Mode in GTA Online."
―Rockstar Games Newswire

Tiny Racers is an Adversary Mode featured in Grand Theft Auto Online as part of the continuation of the Cunning Stunts: Special Vehicle Circuit update, released on April 25, 2017, during the Tiny Racers Week event.[1]

"Survival of the fittest, Los Santos style: get left too far behind, and you'll automatically detonate in a massive fireball. If only Mother Nature were this efficient. Up to four players compete in a retro-styled elimination race."
―Job Description

"Tiny Racers channels the spirit of classic GTA titles with a shifting, bird’s-eye perspective designed to bring you a new flavor of vehicle combat. Up to four players can duke it out for the top spot across seven new courses with just one rule: Don’t blow up. Fall too far behind first place and your tiny car goes boom.
Scattered across the track are various power-ups ranging from Rockets and Bombs to light-wielding Shotaros and Special Vehicles. Making good use of these power-ups is key to closing the distance and avoiding a fiery doom."
―Rockstar Games Newswire

The mode consists of a race against other players in a bird-perspective view. The players have to race against each other and obtain power-ups in order to get an advantage.

The difficulty of the game is that players have little perspective to detect ramps and jumps, making it a notable obstacle to make a difference in the player's positions. If one of the players is knocked off the road or is too far from the leading player for ten seconds, they are automatically wasted and are considered the loser of the round. If all players die, the round will be considered a draw.

The player who manages to reach the finish line or have their opponents far away gets awarded a point. Subsequently, the one who manages to get the required score is the winner of the game.

There are seven Tiny Racers events in GTA Online, each one at a different location. They are as follows: 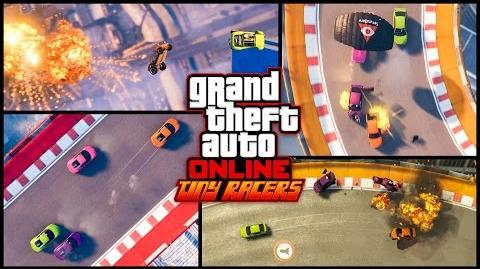 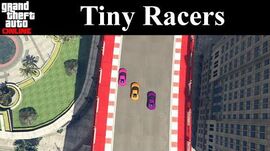 Retrieved from "https://gta.fandom.com/wiki/Tiny_Racers?oldid=1251022"
Community content is available under CC-BY-SA unless otherwise noted.