"Tinkle everywhere, Tinkle in your ear."

Tinkle (BAWSAQ: TNK) is a phone service in the HD Universe, much like Badger and Whiz. The player can buy stocks from them at the Bawsaq.com website in GTA V.

The company is suggested to be a long-running organization, as an older wall-painted advertising in Varsity Heights may be seen depicting the company in its older name, Tinkle Telecom Corp. The company competes with Whiz Wireless, with Whiz going so far to use the catchphrase "Whiz is stronger than Tinkle". The Tinkle Cellphone was manufactured by Panoramic, hinting that they were partners.

In Grand Theft Auto IV, they have advertisments on the in-game television and radio, as well as billboards across Liberty City, with company buildings situated in Alderney City, Algonquin and Bohan. They are also one of the official sponsors of the CNT program I'm Rich.

In Grand Theft Auto V, Tinkle is now partnered with Fruit Computers to provide wireless service to the iFruit smartphone. This is very evident in Fruit Computers advertisements, in which every pictured iFruit has the Tinkle logo clearly visible on the screen. This is a reference to AT&T's exclusivity deal with the iPhone for years after its launch.

The company building in GTA V is located in Downtown Los Santos.

Tinkle is a parody of AT&T Inc.. This is backed up by the fact that Tinkle and Whiz are competitors, much like AT&T and Verizon in real life. 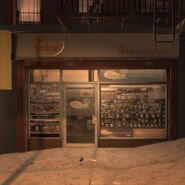 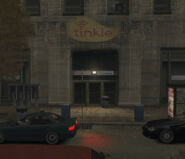 Tinkle store on the corner of Rael Avenue and Mahesh Avenue, Alderney City. 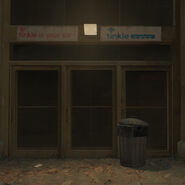 Close up of the store front in Alderney City. 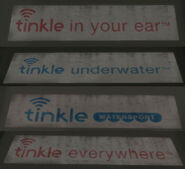 The various slogans displayed on the Tinkle store front in Alderney City.
Add a photo to this gallery 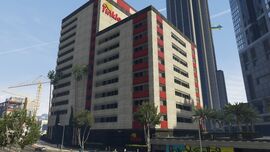 During a random event that can be found in Chumash, the player will encounter a man named Timm, an equity broker in Algonquin, asking for a ride to the Los Santos International Airport. If the player takes him to the airport fast enough, he will give a tip to invest in Tinkle in the BAWSAQ website.

Invest all the money of all three protagonists in Tinkle stocks before completing the random event, take Timm to the airport before the time runs out and wait 18-24 hours in-game, until the percentage of return reach its maximum return, in this case about 33%, then sell the Tinkle stock. As the random event is not needed to progress the storyline or achieve 100% completion, it is best to wait until after completing the storyline and receiving profits from the final heist before doing this mission to maximize profits.

Daisie's phone, with Tinkle as the provider.

Old Tinkle wall advertising in Varsity Heights.
Add a photo to this gallery

A Drone phone powered by Tinkle.

An Itali GTB Custom with a Tinkle livery.

Tinkle Mobile livery for the Cheburek.
Add a photo to this gallery

Retrieved from "https://gta.fandom.com/wiki/Tinkle?oldid=1283736"
Community content is available under CC-BY-SA unless otherwise noted.