Time to Get Away

Time to Get Away

12:00
“The cops have my cousin, El Estupido, surrounded. He's under siege at a farm in Paleto Bay. Two of you get him, and escort him to his chopper at McKenzie Airfield in Grapeseed. You'll be rewarded.”
— Description

Time to Get Away is a mission in Grand Theft Auto Online given to the player by Martin Madrazo. It is available for 1-2 players.

Martin needs the player to rescue his cousin, El Estupido, from the Donkey Punch Family Farm located in northern Paleto Bay. Surrounded by Sheriff's Deputies, Park Rangers and IAA Agents, he will be found hiding in the back barn. Once collected, the player will receive a text from Madrazo notifying them that the cartel think that El Estupido is in custody, and have given the "green light" on a hit. Navigate through spawning law enforcement (FIB Grangers and FIB Buffalos) and cartel (Baller and Cavalcade) chase vehicles, and get safely to the waiting helicopter at McKenzie Airfield. The mission is completed when Madrazo's cousin safely arrives at the airfield.

Arriving at the airfield. 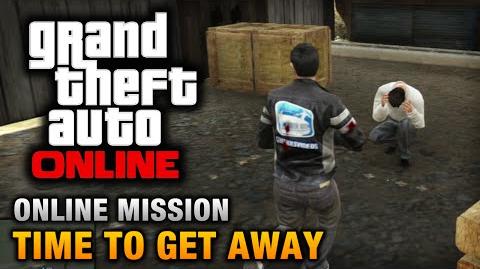 GTA Online - Mission - Time to Get Away Hard Difficulty