Standard White - 100%
“Look at the Lampadati Tigon, count to three, and try not to adjust your pants. Ready? One. Two. Yep we called it. This car's sole purpose is to please the eye, thrill the heart and leave you sticky with delight.”
— Legendary Motorsport description.

The Lampadati Tigon is a supercar featured in Grand Theft Auto Online as part of the Los Santos Summer Special update.

The Tigon is heavily inspired by the De Tomaso P72, seen in the body shape, front end and greenhouse area. The headlights shape and, to lesser extend, the grille, resemble ones found in the Ultima RS. The rear of the vehicle has similarities to the rear of the Lancia New Stratos concept car.

The design of the car is very rounded, featuring a small bottom splitter with small fins on the edges, followed by a rounded mesh grille with two separations on the outer edges and the manufacturer's emblem on the centre. On the upper area, there are large black housings on the front portions of the bulky fenders, each one consisting of dual rectangular headlamps, an L-shaped light strip on the lower side and a vertical amber strip on the outer side. The bonnet area assumes a similar profile to that of the Turismo R, having a prominent wedge shape and two V-shaped intakes around the middle section, followed by a carbon-fibre strip around the base of the windscreen and holding a single wiper.

The sides of the car follow a curved shape around the middle section, with a concave portion just above the carbon-fibre skirts and another one leading to the side intakes. The cabin area features a long windscreen, followed by curved side windows that are part of the gull-wing doors, leaving a small solid frame on top for the door hinges. When open, the car reveals carbon-fibre portions around, where the doors sit. The A-pillars of the car are rather thin and hold a set of rounded mirror shells, which are supported by long frames that extend up to the edges of the car's body.

The rear section of the car consist of a slanted section with a triangle-shaped rear window that exposes the engine bay, followed by a triangular exhaust tip facing upwards and towards the rear, as well as a curvature on the end that forms a ducktail spoiler. On the rear end, the car bears the Lampadati badge below the ductail spoiler and a central meshed vent with a license plate over it, along with circular tail lamps on the edges and three exit vents on the rearmost portions of the sides. A carbon-fibre diffuser can be seen at the bottom, housing a third brake light and an additional meshed vent on the centre, with four blades beside it.

Like the Turismo R, the rear of the car swings backwards, revealing the bare chassis and the carbon-fibre finish on the inner portions of the rear clam. The engine is partially covered by carbon-fibre frames, and carbon-fibre tubes can be seen coming from the side vents and going towards the intake manifolds of the engine. The area behind the engine is occupied by a battery box, the suspension springs, the transmission shafts and the axle arms. There are also two chrome tubes exiting from the exhaust manifolds of the engine and going to the triangular exhaust, appearing to be suspended from the rest of the engine bay. The Lampadati badges can be seen over the engine cover. The underside of the car is fully carbon-plated, leaving sectioned portions for the gull-wing doors and the rear diffuser.

The interior of the car is shared with the FMJ, sharing the same dial set and components. The Lampadati emblems can be seen on the horn cap and the central area behind the seat.

The primary colour of the car is applied on the bodywork and the mirror shells, while the secondary colour is applied on the cabin, mirror support frames, the details of the engine and the suspension springs. Although not accessible, a trim colour is also available for the overstitches of the interior, which is always set to black. It uses a unique set of wheels with 5-spoke split rims and triangular patterns around, wrapped in low-profile tyres.

The Tigon is powered by a single-cam V8 engine, coupled to a 7-speed gearbox in a rear-mid engine, rear wheel drive layout. Its engine sound is similar to the Tyrus and the GP1. 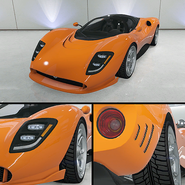 The Tigon on Legendary Motorsport.

A green Tigon pictured (right) in the update’s official artwork.