Standard White - 100%
Not to be confused with the Thrust, a motorcycle in Grand Theft Auto V.
For the 3D Universe vehicle, see Jetpack.

“Since the dawn of time mankind has looked to the skies and longed for a way to hover there, totally exposed, deafened by an unstable mixture of jet fuel and naked flame, idly strafing the rush hour traffic. Well now that dream has thrust its way, crotch first, into reality. So what are you waiting for?
Please note: This vehicle must be stored in a personal facility and can be modified at the Facility Vehicle Workshop.
”
— Warstock Cache & Carry description.

The Mammoth Thruster is a special vehicle featured in Grand Theft Auto Online as part of the The Doomsday Heist update.

The Thruster appears to be loosely inspired by the Martin Jetpack P12, with a simplified mechanism and jet thrusters rather than fans.

The vehicle is depicted as a one-man jetpack intended for Military/Government use. On the lower area, the vehicle has two frontal rigid supports with small sections on which the operator stands, while the rear has two retractable stands that work similarly to the retractable undercarriage on most aircraft. On the upper area, there is a "half-capsule" body that houses the functional components and the safety belts for the operator, while two large vetoring nozzles are seen on each side of the main body. Similar to regular aircraft, the Thruster features two control sticks, where the right one is used for general maneuvering and the left one for the yawing functions. The Thruster lacks any sort of dials or similar components other than a small console with buttons on the right side, which the character uses for igniting the engines upon entry.

The vehicle can be equipped with dual weapons mounted on small stub wings, being either three-barreled .50 caliber Miniguns resembling GAU-19 gatling guns or missile launchers that resemble the ones available for the Rogue.

Piloting the Thruster is comparable to piloting a Buzzard or a Havok, as it is light, fast and versatile. The player can almost squeeze through areas where a helicopter cannot reach. However, one should be careful while piloting it, as crashes may damage the engines and suffer from constant shutdowns in a similar way to heavily-damaged aircraft, while hard impacts may cause it to explode, killing the operator in the process. When the stands are retracted, the Thruster hovers slightly above the ground and will maintain that distance all the time, acting as a safety measure to avoid a direct crash to the ground in case the player loses a considerable altitude. Leaving the vehicle while the stands are retracted results in an automatic deploy to land safely, provided the player is at ground level.

A notable characteristic of the Thruster is that if the player holds LB and RB (Xbox One) or L1 and R1 (PlayStation 4), the vehicle gets into an upright position, allowing to move with better response and strafe quicker. It also helps when losing control by hitting an obstacle, as it avoids the vehicle to pitch or even roll uncontrollably, especially on closed environments such as parking lots or tunnels. In this mode, its speed is reduced in favor of control, which can also help at avoiding obstacles or when stopping at a desired landing spot quickly. Note that in this mode, the direction the character faces is controlled by the camera.

The vehicle employs two vectoring turbojet engines, which provide the necessary lift and tilt forward or backward based on the pitch direction. Two directional nozzles can be seen on either engine and functions when the vehicle is yawing to a side, emitting a barely-visible smoke while countering the turbulence and a noticeable smoke when strafing with the method mentioned above.

The aircraft can be equipped with two JATO thrusters, which are intended for a near-instant take-off and quick acceleration. JATO thrusters propel the aircraft for 3 seconds and are recharged upon landing.

Because of its "open-cabin" nature, the Thruster offers little protection to the operator against gunfire and has little armor, only capable of sustaining a few rounds from small/medium weapons before it starts smoking. Heavier weapons and explosives can destroy the vehicle quickly, making it unsuitable for aerial fights against other armed aircraft, as well as nimble weaponized vehicles like the Oppressor.

The Thruster can be only equipped with a single set of weapons operated by the pilot:

The Thruster can only be modified at the Weaponized Vehicle Workshop inside a Facility.

When purchased, the Thruster comes painted in the following colors by default:

A Thruster in the official artwork.

The Thruster as seen in the trailer for the Doomsday Heist update.

A Thruster with the Missiles upgrade. (Rear quarter view) 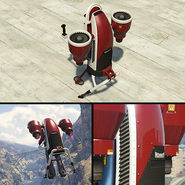 The Thruster on Warstock Cache & Carry.

the Thruster on the updated Rockstar Games Social Club.

The Thruster in the cinematic preview on Rockstar Games Social Club.

The Thruster in a promotional advert in 2020.