GTA Wiki
Register
Don't have an account?
Sign In
Advertisement
in: Vehicles, Vehicles in GTA V, Vehicles manufactured by Dinka,
and 8 more
English

Not to be confused with the Thruster, a jetpack in GTA Online.
For the magazine with the same name, see Thrust (magazine).

“When they call them 'organ donors', they aren't thinking of motorbikes that'll go so fast you'll be liquidated when you hit a wall. Live fast, die young, leave a long gristly skid mark down the highway.”
— Legendary Motorsport description.

The Thrust is primarily based on the 2010 Honda DN-01 (main fairing, mirrors and saddlebags), although it resembles the 2014 Honda CTX700 (body, engine and lower fairing) and the 2014 Honda CTX1300 (gauges and headlights).

The Thrust is depicted as a sports bike with a long body and aggressive styling, where a small front fender can be seen directly mounted on the black fork legs, while the upoer section features a long fairing with narrow headlights and turning lights over the mirror shells (a feature similar to the NRG 900 and the Carbon RS in the enhanced version). The upper clamp features two extended arms intended for the handlebars, while the front portion features a small windshield and a carbon-fiber housing for the motorcycle's dials, which are the same "Sports Bike" ones from vehicles like the Akuma and the Bati 801.

The main body features side fairings with rear-facing exit vents next to the intercooler and black protective frames partially covering the engine bay, while an additional long fairing is seen at the bottom. There is a bulky fuel tank on the front and black seats almost reaching the rear of the bike, just over the long rear fender. An exhaust pipe exits on the right side and has a wide muffler next to the rear wheel.

The rear of the bike features a single red tail light on the end of the rear fender and support frames for the turning lights and the license plate. The rear wheel is connected to the bike by a left swingarm, along with the corresponding chain drive around it.

The bike only has access to a single color for the fenders, fairings and fuel tank, and uses a set of wheels that are similar to the "Speedway" rims available in Los Santos Customs.

The Thrust has decent acceleration, but its top speed is quite impressive for a motorcycle of its class. The handling is fairly responsive for a motorcycle of its type and weight, although its turning circle is seemingly wide which makes it unsuitable for races with a lot of twists and turns. The Thrust is also surprisingly proficient at performing wheelies, attaining its acceleration.

The Thrust is powered by an Inline-4 engine, with the website claimed to be a 999cc engine capable of producing 196hp. It is coupled to a 6-speed gearbox and shares the same engine sound as the Bati 801 and its RR variant.

The Thrust as seen in a pre-release screenshot. 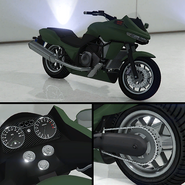 The Thrust on Legendary Motorsport.

The Thrust on the updated Rockstar Games Social Club.

The Thrust in the cinematic preview on GTA V Rockstar Games Social Club.

The Thrust in the cinematic preview on GTA Online Rockstar Games Social Club.