This mission crosses over with I luv LC.

Niko guarding the hostages while Derrick goes down to the safe and plant the PE4.

Packie: "You could've mixed the explosive better, couldn't you Derrick?"
Derrick: "And you could've been more careful with your boy Michael! He should be with us right now!"
― Derrick and Patrick McReary arguing about their disastrous bank heist.

Three Leaf Clover is a mission in Grand Theft Auto IV given to Niko by Patrick McReary.

Niko meets Packie, Michael and Derrick at the McReary Residence in Dukes. After a brief introduction, the group drives to the Bank of Liberty on Columbus Ave in The Exchange, Algonquin. Armed and wearing balaclavas, Michael holds the customers hostage in the foyer, whilst the other three head to the vaults. After making their way into the vaults, the group steal $1,000,000. However, Michael is killed by Eugene Reaper, who is killed in retaliation by Packie and Derrick. The surviving trio return to the street and find themselves surrounded by NOOSE and LCPD officers. After fighting their way to a subway station, the group escapes via the underground subway tracks, eventually returning to the overground and stealing a Huntley Sport to make their getaway. After evading the police, Niko drives Packie and Derrick back to the McReary Residence. Packie mourns Michael's death but congratulates the rest of the group for pulling off the heist, and he gives Niko his share of $250,000.

"The daring heist took place at a Bank of Liberty branch in Downtown Algonquin earlier. One of the robbers was killed in the raid. He was identified as Michael Keane, a felon from Dukes. A bank customer, computer engineer Eugene Reaper attempted to stop the robbery and was murdered. Authorities are on the lookout for three suspects.

"A daring raid on a downtown branch of the Bank of Liberty has left one robber dead along with multiple police and civilian casualties. The suspect has been identified as Michael Keane, a convicted felon from Dukes. Four men wearing suits and balaclavas entered the branch and held the customers hostage while blowing the door to the vault with explosives. In the confusion, brave customer Eugene Reaper attempted to stop the robbery and was murdered in cold blood. Three robbers left the bank on foot and fought their way through police before escaping on the subway. Authorities are questioning all known associates of Mr. Keane in an attempt to discover the identities of his accomplices. The Bank of Liberty estimates that in excess of half a million dollars was stolen." 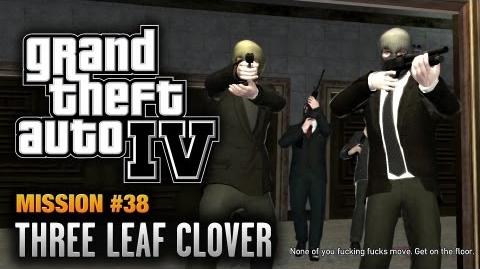 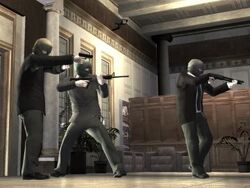 Michael , Packie, and Derrick in the bank.

The hostages in the bank. 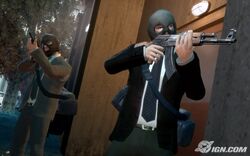 Niko with Packie fighting their way out. 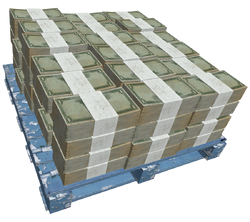 The money of the Liberty City Bank vault.

The crew goes down to the subway.

The police are waiting for them.

NOOSE squad is storming them while they try to escape.
Walkthrough 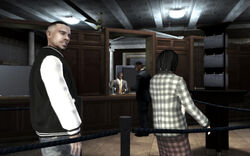 Luis in the bank. 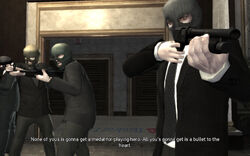 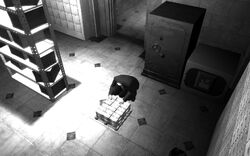 Niko, seen by a security camera, gathering the money.

Niko walks away from the safe. 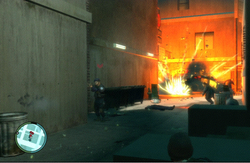 The explosion of the police car.

Niko going down to the subway station – Emerald LTA.

The crew is shooting NOOSE in the subway tracks.

Niko arrives with the crew at Packie's Ma's house safely, except Michael.