Michael rappelling down the IAA building.

Rescuing Ferdinand Kerimov from the IAA

By the Book
Hood Safari

In-game time
“Franklin and Trevor get roped into helping the FIB.”
— GTA V description at Rockstar Games Social Club
“We have received intel that they're keeping Mr. K at the local Agency station. The Agency is stepping up their questioning because of your moronic antics down at the coroner's office. We need to get him out of there before he blabs.”
— Steve Haines

Three's Company is a mission in Grand Theft Auto V, given by FIB agent Steve Haines to protagonists Michael De Santa, Trevor Philips and Franklin Clinton. It is the first mission to involve all three protagonists in the storyline.

Michael meets Dave Norton, Steve Haines and Andreas Sanchez outside the FIB Headquarters. Haines explains that the IAA are interrogating Ferdinand Kerimov, the man Michael attempted to identify at the coroner's office. Haines orders Michael to extract Kerimov from the IAA Headquarters before he informs the IAA agents of the FIB's corrupt actions. Michael refuses, but Haines uses his position as Norton's superior to coerce Michael and Norton into performing the task.

Michael and Dave get into Dave's car and drive to an FIB warehouse in East Los Santos. During the drive, Michael phones Franklin and asks him to meet them at the warehouse. Dave tells Michael to call Trevor, but he refuses, so Dave explains that they called him previously. The duo arrives at the warehouse, where Michael introduces Franklin and Trevor to each other, before explaining their task. Trevor will be flying the helicopter to the IAA building, Michael will perform the extraction while Franklin will provide support for Michael using a sniper rifle.

Trevor and Michael get in the helicopter and fly to the IAA building. When they arrive, Franklin is already perched on the roof of the Arcadius Business Center opposite the building. As Trevor hovers overhead, Michael rappels down the building and finds Kerimov being tortured by Karen and some other IAA agents. Michael breaks the office window and grabs Kerimov whilst holding a gun to his head. The agents point their weapons at Michael, prompting Franklin to kill them. With the first wave of agents clear, Trevor hoists Michael and Kerimov up while Franklin kills the remaining agents. Once Michael and Kerimov are in the helicopter, some IAA helicopters appear. Franklin kills one pilot, while Michael kills the others. After the helicopters have been taken down, Franklin leaves, while Trevor flies back to the FIB warehouse. When they land, Michael hands Kerimov to some FIB agents, who bundle him into the back of a van and drive off. Michael and Trevor split up and the mission concludes.

"Eye witnesses believe they had just seen the crime of the century - an audacious raid on the IAA Headquarters in Downtown Los Santos, in which a man was snatched from an office by a suspect hanging from a helicopter before both escaped. Not so, according to the IAA. Agency spokeswoman Lucinda Jacob told reporters the incident was merely a training exercise, and nothing to be concerned by. "We are constantly training and yesterday was no exception. An agent posing as a terror suspect was snatched in a practice raid to see how our systems and processes respond to extreme duress. Despite problems with our funding, people should be relieved to know our systems worked great. You're in safe hands," Jacob said."

""Not a break-in, we were just practicing", say the IAA. Eyewitnesses thought they'd seen the crime of the century; Instead, it turned out they were watching a train exercise at the IAA Headquarters building in Los Santos. It seemed like a daring raid in which a suspect was snatched by a man dangling from a helicopter. But no, officials were quick to count on these rumors."

Michael rappels down the IAA building

Michael shooting at the chopper

Their helicopter losing the IAA choppers

Michael looking at the city

An IAA agent aiming his gun at Michael

A chopper behind Trevor's Frogger

Michael breaking into the office

A screenshot of Michael attacking the pursuing choppers

A screenshot of Michael attacking the IAA agents as he extracts Mr. K

Franklin across the street, as the sniper, covering Michael

Michael's outfit during the mission 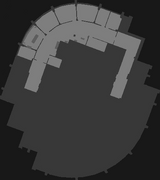 The IAA Building as seen from the minimap (Enhanced version) 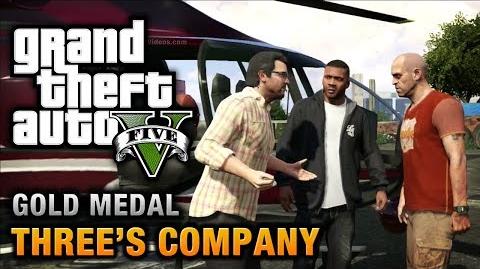 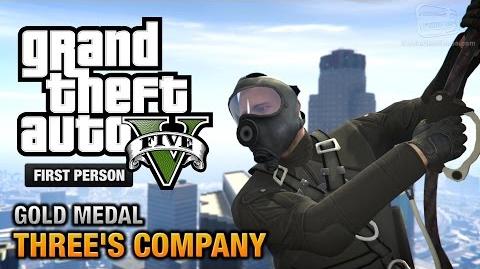 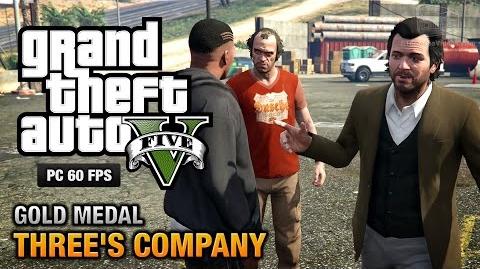