Standard White - 100%
“Forget unitary construction. Put your monocoque back in your pants. The rolling chassis is back, and it's making sweet, naphtha-kerosene-drenched love to the hottest body in the world. Don't worry if you don't understand any of that, just take the corners hard and you feel the future. Trust us.”

The Truffade Thrax is a hypercar featured in Grand Theft Auto Online as part of The Diamond Casino & Resort update.

The vehicle appears to be based on the Bugatti Divo, a track-focused hyper car. The rear of the car is primarily based on the Italdesign Zerouno, but with the hexagonal exhaust mounted much higher than on the Zerouno. The sides of the Thrax bear resemblance to the Bugatti Chiron, or perhaps, the Vision Gran Turismo, with angled lines reminiscent of those found on the Lamborghini Centenario. There is also a French flag sticker on the sides, further alluding to the Divo, albeit on the rear quarter panel as opposed to the front in the actual car. The shape of the headlights might be stylized to resemble the first generation Audi R8 headlight featuring similar shape and LED stripe following the bottom curve.

The Thrax assumes a body design similar to the Adder and the Nero, being a bulky hypercar with various areodynamic features around. On the front, the car has a slightly extended bottom and carbon-fibre inserts and fins around the outer edges. The centre of the car has a trapezium-like mesh grille bearing a chrome detail on the surrounding and the blue "TRUFFADE" emblem around the upper area, while the sides have large intakes with carbon-fibre horizontal separations and small inset areas above these. The upper area features long inset areas running towards a set of intakes located just beside the bonnet, as well as a set of dual headlamps on the edges, each one consisting of circular lamps within black housings and modern strips running below the circular lamps and around the front quarters. The bonnet itself assumes a similar shape to the ones from the Adder and the Nero, but uses large inset portions leading to dual intake ducts and a carbon-fibre strip around the base of the windscreen.

On the sides, the car has a similar profile to the Adder and the Nero, using similar door arches and side vents, also finished in chrome. Carbon-fibre skirts with rear fins and coloured details representing the flag of France are seen at the bottom, while rear-view mirror shells with chrome strips are seen on the cabin area, as well as black rear-quarter panels. On the rear section, the car uses carbon-fibre slatted vents on the rear fenders and the silver Truffade's "T" logo on the rear centre, along with a dedicated section for the engine bay.

On the rear end, the car uses dual exit vents spanning the car's width, with the lower ones bearing numerous lamps on the sides. There is a wide central section housing two wide exhaust tips on the sides and a smaller one on the centre, while the lower area is predominated by a carbon-fibre diffuser, which has two vertical exit vents on the outer edges and holds a license plate on the centre. Its underside also uses a CFRP plate covering the entirety of the vehicle.

The vehicle uses a dedicated "Super1" interior; it is essentially the same "Nero White" interior seen on cars like the Nero, the Nero Custom and the XA-21, but with subtle modifications, like a black section around the front area of the dashboard, just below the windscreen. While the dial set is seemingly identical to those from the aforementioned cars, files indicate it actually uses the "Prototipo" dials from the X80 Proto, instead of the "Race Generic" ones (which also reuses analog dial textures from the aforementioned car). The Truffade emblem can be seen on the horn cap.

The primary colour of the vehicle is applied on the front area, doors, part of the roof, fender vent details, engine bay, inset areas of the rear end and the Truffade emblems on the stock wheels, while the secondary one is applied on the lower front end, inner portions of the grille, roof, rear section and cam covers. Although inaccessible, a trim colour is also present for the interior, similar to the Nero. It uses a unique set of rims consisting of various spokes, thinner frames and black central caps bearing the manufacturer emblem, wrapped in low-profile tyres. The rims can also support a dedicated colour, although only naturally-generated examples from Content Creator, the one in the Casino mission "House Keeping" or the one given as a Lucky Wheel reward may have one.

The Thrax is in a league of its own, with impeccable grip and tremendous amount of acceleration and top speed. It can also bob and weave through congested traffic and its nippy handling is remarkable. In addition, its high amount of top speed surpasses even other Super cars on long straights in Races. Its durability, however, is average, and is not very tolerant against harsh collisions so care must be taken when driving the Thrax for the first time especially when fully upgraded as the high acceleration can quickly result in a slight loss of control.

The Thrax has one (the eleventh) Advanced Flag enabled.[1] The purpose of this flag is unknown, but it appears to have little impact on performance.

Official screenshot of the Thrax.

The Thrax with a Ink Inc. livery.

The Thrax and a female player wearing a Truffade shirt. 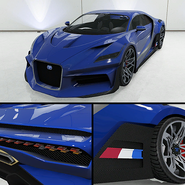 The Thrax on Legendary Motorsport.

The Thrax on the updated Rockstar Games Social Club.

The Thrax in the Cinematic preview on Rockstar Games Social Club.

The casino's Thrax shown in the promotional concept art of The Diamond Casino & Resort. 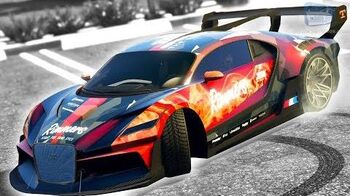