Its logo is a tortoise dressed as Thor, the Norse god of thunder, holding a hammer and a gun.

The store sells vinyl collectibles "for grown men" with characters such as:

In a beta screenshot there is a poster advertising Grand Theft Auto III and Grand Theft Auto: Vice City Kubrick collectible box sets that were actually sold by Rockstargames in the front window of the Alderney store. This texture file remains in the game files but was replaced with a second copy of the Mooey/Jackasaur/Henry Blower poster in the final release. The name seems to be a portmanteau of the word "tortoise". 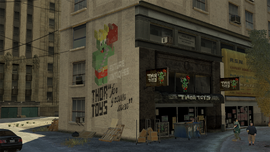 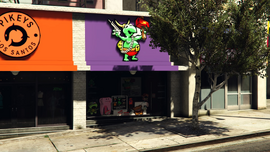 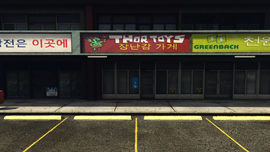 Poster details in the window of the Burton store in GTA V.
Add a photo to this gallery
Retrieved from "https://gta.fandom.com/wiki/Thor_Toys?oldid=1204168"
Community content is available under CC-BY-SA unless otherwise noted.