Thomson Scrapyard is a scrap yard in Blaine County, San Andreas in Grand Theft Auto V and Grand Theft Auto Online. It is found south of Senora National Park by the junction of the Senora Freeway and Route 68 in the Grand Senora Desert.

Items of interest include two wrecked aeroplanes: two Jets of FlyUS and Herler Airlines, both airlines in GTA V. The two aircraft are in old versions of their airline's livery - notably, the FlyUS aircraft with livery of that found in Grand Theft Auto IV. It is possible to enter the cabin of the Air Herler plane, but it is partially blocked and neither aircraft possess any usable items. The scrapyard also contains several wrecked Mallards, with detached wings and vertical stabilizers and deformed bodies and a wrecked Uranus hatchback from GTA IV.

The scrapyard also contains various scrapped cars and a Lando-Corp Scrap Handler (at the southern fence), but none of these are usable.

The entire scrapyard is fenced off, and two gates on both sides of the yard serve as entrances.

The scrapyard may be based on the Victorville airplane graveyard, due to the fact that the Thompson scrapyard is close to Harmony, which is based on Victorville.

Origin of the name

The Headquarters of the producers of GTA V are located in Edinburgh, Great Britain. Consequently, many places in San Andreas are named after real-life places in Scotland (Hawick being an example - Rockstar's choice caused outrage from several residents of Hawick in Scotland[1]). Thomson Scrapyard is most likely an exception, as a scrapyard in Galasheils (just South of Edinburgh) is named S & I Thomson Auto Salvage and Motor Spares. 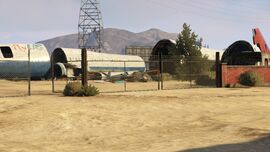 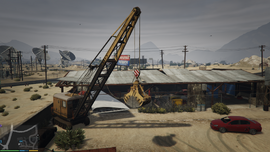 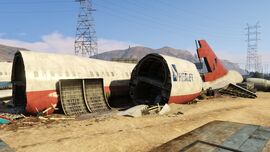