Thomas "Tom" Stubbs III is a character in the Grand Theft Auto series who appears as a main character in The Lost and Damned. He is a Liberty City congressman who Johnny Klebitz worked for.

Thomas Stubbs III was born in 1955. During a conversation about his BAWSAQ broker, Stubbs implies that he was raped in junior high school, as he metaphorically says "I'm being raped!" before adding "I haven't felt like that since the junior high school." At an unknown point in time, he became a Liberty City congressman, but has been faced with allegations of corruption and pork barrel spending. He has also been criticized by the Liberty City media for wasting public resources due to his attempts to finance a major tsunami protection plan and an avalanche warning system for the city, which would be unnecessary since Liberty City is not surrounded by mountains and a tsunami off the east coast of the United States is unlikely.

Role in the Game

When Johnny first meets Stubbs in the Jousters Club, he appears completely naked after getting a massage (something that is symbolically linked to the story, since Stubbs shows himself bare, personality wise, to Klebitz in that same scene). In order to get some funds from his family, he orders Johnny Klebitz to kill his uncle, Arthur Stubbs, who is the holder of the family funds. Johnny kills Arthur Stubbs at Francis International Airport in Dukes, thus giving Thomas Stubbs the funds.

Johnny later works for Stubbs to free several Alderney State Prisoners, and supporters of Stubbs. Johnny frees them before they are transferred to Alderney State Correctional Facility in south Alderney, and the prisoners escape to sea.

Johnny later does smaller jobs for Stubbs, such as helping a convicted CEO escape the FIB, taking blackmail photos of a politician, and bugging Bryce Dawkins' Infernus with surveillance equipment. He later gives Johnny the number to call and listen in on the car, and would be able to hear Bernie Crane discuss about his relationship with Dawkins, how he paid attention to Luis Fernando Lopez, protagonist of the The Ballad of Gay Tony, and later, would be able to hear Niko Bellic battle the LCPD (since the Infernus was given to Niko by Bernie sometime after Johnny bugged the car).

Stubbs repays Johnny for his work by visiting Johnny at the Lost MC Clubhouse. He tells Johnny not to worry about Ray Boccino, but also informs him that Billy Grey plans to pin a major drug operation on Johnny and Angus Martin to send them to prison and allow Billy to enter the witness protection program. After hearing this, the remaining Lost MC members attack the Alderney State Correctional Facility, where Johnny kills Billy.

After the mission, Stubbs calls Johnny to congratulate him for finally defeating his demons and to offer him a more permanent job as his personal hitman. However, Johnny declines Stubbs' offer and sardonically wishes him good luck in his corrupt dealings, severing his ties to Stubbs for good.

Stubbs is a highly-corrupt congressman, who will perform any illegal operation in order to further his own political career, including (but not limited to) murdering his own uncle to secure family funds, releasing his supporters from prison, blackmail, wiretapping and electronic surveillance. He is also a cynical man who is well aware that he is corrupt and he doesn't even attempt to lie about what type of person he is from Klebitz, and through his dialogue shows small amounts of elitism. However, Stubbs and Klebitz are two of the few characters to display loyalty towards each other at the end of the game, as Stubbs helps Johnny by informing him of Billy's plans to send Johnny to prison, telling Johnny he was "good for a favour". 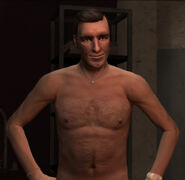 Tom Stubbs in the mission, "Politics," the infamous cutscene where he appeared completely naked.

Retrieved from "https://gta.fandom.com/wiki/Thomas_Stubbs?oldid=1162261"
Community content is available under CC-BY-SA unless otherwise noted.