The Thermite Bomb is a gear in Grand Theft Auto Online.

The Thermite Bomb is a plantable device, like Sticky Bombs. The term "thermite" refers to a pyrotechnic composition of metal powder fuel and metal oxide, implying that is an incendiary weapon. It doesn't explode like any grenade - instead, it burns into the surface until the power wears off. It uses exothermic reduction-oxidation reaction to burn, causing metals to melt with its high temperatures. It creates a large area of orange-red smoke (fuel-oxidizer), which the player covers their face from in order to defend them from the hot metals hitting them.

Like the Drill in The Fleeca Job, the Thermite Bomb is a special device available only during The Pacific Standard Job heist. It's used to break through the bank's two metal doors by burning out the locking mechanism until its space is completely empty in order to reach the vault underground. The player is given a total of 3 thermite bombs, with the last one used on the final metal gate behind the vault door.

In the The Diamond Casino Heist update, thermite bombs are an essential piece of equipment that the protagonist needs to acquire if they are doing the "aggressive" approach.

Thermite Bombs appear in the Los Santos Tuners update as part of The Bank Contract, where they are used to open the metal vault gates in several Fleeca banks. 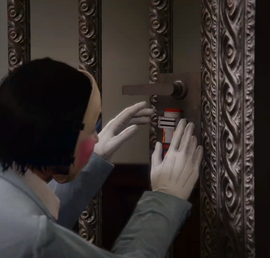 Planting a Thermite bomb on a bank vault door. 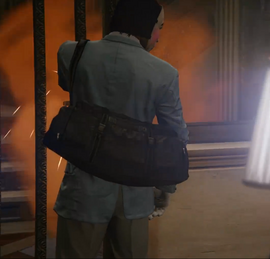 Thermite burning through the metal. 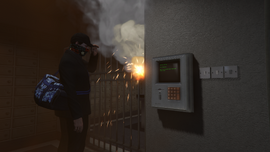 A thermite bomb being utilised during The Bank Contract finale.