“'Ey, look, today's target is a cautionary tale, homie. The target is one of the founding members of that phone company, bitterSweet. Man, back in the day he lived the whole Vinewood tech pioneer life... private jets, kale smoothies, cocaine for breakfast... man, you know, all that crazy shit. Then everyone started buying iFruit phones instead, and he went off the rail real fucking fast. Got into all sorts of nasty shit... and I mean nasty shit... and the company fuckin' tanked.”
— Franklin's payphone description

Franklin Clinton described him as a tech pioneer who cofounded bitterSweet, riding the highs of the company success only to fall dramatically when IFruit took over the market.

He uses a character model typically found in the Grand Senora Desert, and appears in a black Redwood t-shirt, GI glasses, blue jeans, and sandals.

“But now they got a chance of a new relaunch to turn it all around. But here's where we come in: his cofounder still clean as they come, but he can't do shit while this degenerate fuck has the reins. So we goin' arrange for him to have a lil' accident. The cofounder takes over, and then the stock prices pick up, which means our client's goin' make a big fuckin' bank, and we get paid.
We got the target at the motel with a nasty-ass prostitute right now. Go put his ass out of his misery.”
— Franklin's payphone description

Franklin facilitates his assassination by the player on behalf of the other bitterSweet founder who will be able to take over the company and make a lot of money as a result of his "accidental" death.

He can be at the Bilingsgate Motel in Rancho, The Pink Cage Motel in Hawick, or The Motor Motel in Harmony with a prostitute and can be killed as soon as he exits the room or the player can wait until he gets into his Mariachi Tornado ("BTRSW33T") for the bonus criteria. 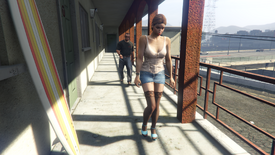 Leaving the motel room with a prostitute. 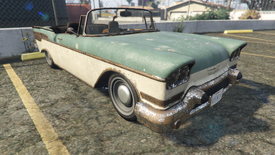 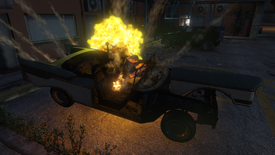