Michael: "We did what you said. Right? Got those people off your back? Now, you're gonna do like you said and cut me loose. Right?"
Dave: "Things are not gonna work out quite that way. There's a bit of a problem..."
Steve: "That's right, Davey boy! You could say that!"
—Steve interrupting Michael and Dave

The Wrap Up is a mission in Grand Theft Auto V, given by FIB agent Dave Norton to protagonist Michael De Santa. Fellow protagonist Trevor Philips is also playable during a later part in the mission.

Michael and Dave meet at one of the lookout points at the Kortz Center as Dave was none too impressed with how Michael and Trevor attacked Merryweather and they have discussed things. Michael confirms that the raid at the FIB headquarters was successful and insists that Dave honor the promise to let Michael and his friends go. Dave begins to explain that there has been a change of plans, but he is promptly interrupted by the arrival of Steve Haines and Andreas Sanchez; Haines orders Sanchez to arrest Michael and Dave so that he can cover up the raid on the FIB and satisfy his desire for revenge for his career record being completely ruined by Michael. A four-way Mexican standoff occurs between the men. Dave attempts to talk them down. However, before they can lower their guns, a group of IAA agents, led by the U.L. Paper Contact, arrive and attempt to arrest all four of them. Almost immediately, a rival group of corrupt FIB agents also appear. Haines demands to know who sent the tactical team, and Sanchez betrays his boss by revealing that he is a double agent and that the FIB team is working with him. Just as Haines complains against the IAA about their corrupt crimes when the U.L. Paper demands everyone to surrender, the situation escalates further when a Buzzard Attack Chopper, operated by Merryweather mercenaries, suddenly arrives. The situation quickly explodes into violence; Haines gets shot in the leg by an FIB agent (the same leg he had shot himself in during the raid at Humane Labs and Research), and in turn, shoots and kills Sanchez in the process, leading to an all-out firefight.

Haines quickly escapes. Michael and Dave attempt to help each other, but are almost immediately separated. Michael fights his way towards Dave, killing the FIB team and IAA agents all together. But soon, another Merryweather helicopter, a Buzzard, appears and Michael must retreat to cover.

The player is then shifted to Trevor, who is hiding in another part of the museum. Trevor kills the pilot of the Buzzard with a sniper rifle. He then makes himself known to Michael, who then asks if he has has come to kill him. Trevor says he is not there to kill Michael at the moment, but he also will not allow the FIB or anyone else to deny Trevor the right to take his former partner's life. Trevor returns to the assault and provides support for Dave, taking out enemies in the musuem's courtyard while Dave crosses the area. Trevor complains why is he saving the man who killed Brad and would want to kill him next, before Michael explains that Dave is their only hope to get off the FIB's case now due to Haines' betrayal and escape after failing his attempted arrest. Once Dave is in cover, the player can choose to continue as Trevor or return to Michael. As Trevor, the player must help Michael get down to the courtyard, clearing out FIB agents and another Merryweather helicopter. As Michael, the player must make their way down to the courtyard, fighting through FIB agents and Merryweather troops in order to reach Dave.

During the gun battle, Michael demands to know more about the FIB team that were sent here, Dave explains that they are a corrupt division that have either gone rogue or on the IAA payroll (which could mean that those FIB agents are all double agents working with the IAA, even though they were sent by Sanchez). Trevor then wonders why are Merryweather involved in this three way war battle, and Dave complains that his previous activities that involved stealing an experimental weapon, hi-jacking their plane and attacking their train have got them involved in their crimes and it will be difficult to avoid any more involvement in Merryweather's operations.

Once the player has completed these particular objectives, the player as Michael flees the museum with Dave. The FIB agent tells Michael that he will be in touch, then leaves. Michael must escape on his own, a process which involves either evading or destroying one final Merryweather helicopter. Trevor calls Michael to have a conversation in private, and suggests that Michael meet him behind a pawn shop in Morningwood.

Upon arrival at the pawn shop, the two argue. Trevor states that he no longer trusts Michael, but that he still wants to finish off their last big score, the Union Depository. The two call Lester Crest, who states he will start organizing the heist. Trevor threatens Michael a final time, then leaves.

Afterwards, Michael calls Dave, who explains that the affairs of the IAA will be dealt with using Sanchez as the scapegoat of the plot. However, Haines refuses to cooperate until Trevor is eliminated as a sacrificial lamb. Michael express reluctance to kill his former partner as he finishes the call.

"City in panic, massive shootout involving IAA, FIB, Merryweather and unknown terror elements. We leave with a horror show at the Kortz Center; where a terror incident was foiled by a combination of forces from the FIB and the IAA. Some witnesses even believe Merryweather security services may have helped calm things down."

Reporter: "Yes, it's carnage here and also not a little confusing, no one is quite sure what happened, but thanks to their utter professionalism, our security forces were able to have people at the scene of the crime almost as soon as it began; an attempt to arrest a terror suspect seems to have gotten into a gun battle. No one is quite sure what comes next for a city in panic. Back to you, Sheyla."

"Usually it's kept to the movies, but Los Santos erupted in real terror yesterday. Many agents were left dead as the IAA and the FIB fought valiantly to defeat an unknown enemy assailant in a bloody battle at the Kortz Center. Private security contractors from Merryweather were also thought to have engaged the enemy as the war on terror hit our streets. Shocked passersby watched agents as they battled bravely to stop the terrorists. Confusion reigned, and at certain moments it seemed as if the agents were fighting each other, but order was soon restored. FIB spokesman Gary Lane told reporters at the scene - "We will not sleep until we have identified the people responsible for this incident. Several agents fell in the line of duty, but luckily no innocent people were effected." Both IAA and FIB officials called for increased funding to fight the war that has now arrived in our city." 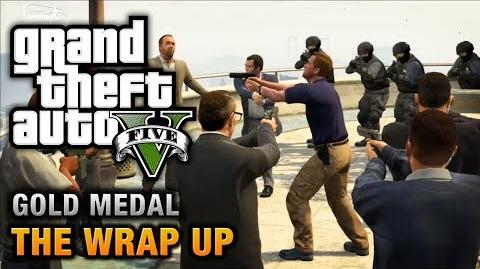 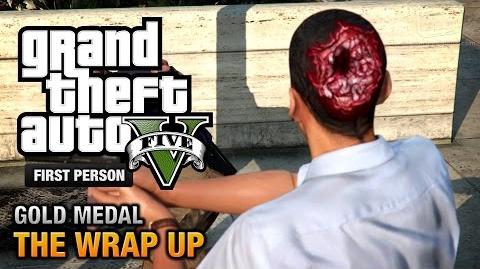 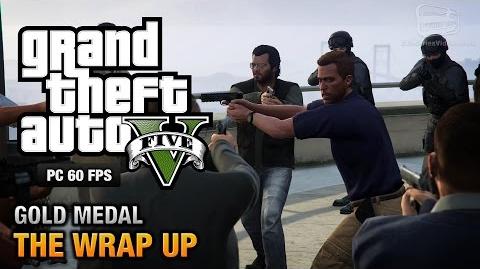 Sanchez is killed by Haines.