The Wizard's Ruin is an arcade minigame developed by Pixtro. It is available in the Arcade in Grand Theft Auto Online.

The game takes place within a medieval fantasy side-scroller as Thog who was camping with his brother Grog, but his brother Grog gets taken by a sleazy evil wizard and Thog must save him by traversing multiple areas with a boss at the end of each stage. Thog must fight a plethora of mythical creatures with only his dagger and his magic.

Playing as a Thog, he has access to a dagger and magical powers, holding down the magic attack will cause lightning to destroy all surrounding enemies, and another button will super strengthen Thog. When Thog is superpowered he can punch enemies with his fists as a stronger attack.

There are a multitude of enemies Thog must fight against such as:

There is a third option in the menu to play Grog mode which can be unlocked by completing the game as Thog. The gameplay is the same except that the player cannot use super strength and enemies drop more valuable items.

There are three challenges available in this arcade game. Special T-shirts will be awarded to the player if they manage to complete each one of them. Completing all challenges will also award a trophy in the Arcade Trophy Case.

This challenge requires the player to complete the game as Grog. As mentioned above, the player will have to complete the game first as Thog in order to unlock Grog as a playable character. Playing as Grog is a tad bit more difficult than Thog since Grog can't level up or evolve so players will have to adapt their play style to be more cautious. Remember to use flying kick or magic tricks if you get surrounded by enemies. During the final boss stay close to the wizard so you don't take damage.

Completing this challenges awards the player with the The Wizard's Ruin Rescue Tee.

These two challenges require the player to score at least 1.000.000 points and collect 950 treasures in a single playthrough, respectively. The challenges are best done at once in Grog Mode since enemies will drop more loot and allow the player to score more points. A lot of loot can be farmed during the boss fight in stage 3, just don't kill the giant spider and focus on killing the smaller ones and collecting their loot. Make sure of killing them closer to the center of the screen to avoid causing their loot to disappear off-screen and to have at least 800.000 points before going ahead to the final stage.

Completing all three challenges awards the player with three t-shirts (Thog Mighty Sword Tee, Thog Tee and Thog Bod Teee) and a sword shaped trophy in the Arcade Trophy Case. A copy of this trophy will also be available in the player's Penthouse to be used as decoration. 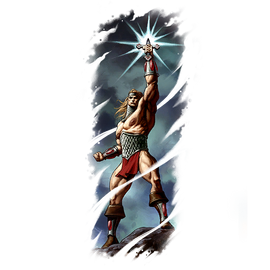 The graphic of the Mighty Thog Tattoo.
Add a photo to this gallery

Retrieved from "https://gta.fandom.com/wiki/The_Wizard%27s_Ruin?oldid=1237779"
Community content is available under CC-BY-SA unless otherwise noted.