The Well Stacked Pizza Co. is a parody of Domino's Pizza, using a dotted logo like its real life counterpart, as well the name itself possibly referring to the stacking nature of dominoes.

Pizza Boy is a Grand Theft Auto: Vice City side mission begin when boarding the scooter outside any Well Stacked delivery window. Successful completion of level 10 returning to the window rewards $5000, increases maximum health 50 points to 150 and is required for achieving 100% Completion (a software glitch then prevents the scooter from spawning at the Vercetti Estate after mission success.)

In Grand Theft Auto: San Andreas there are only two ways the player may obtain the vehicle as there are no sub-missions associated with the delivery scooter. The scooters may occasionally be found in car parks or players may rarely spot a Well Stacked Pizza employee riding the scooter in any part of the game, with a higher chance of finding one in urban areas.

Although the business has no storefronts in in Grand Theft Auto IV, employees of Well Stacked Pizza are seen outside different pizza restaurants around the game world (such as Pizza This in Leftwood), wearing uniforms with Well Stacked Pizza logos and baseball caps with the logo omitted. In addition, a shuttered storefront at the Alderney Casino in Westdyke, Alderney bears the logo and name of Well Stacked Pizza. Some pedestrians mention this restaurant as their destination when their car is blocked, although they refer to the company as "Pizza Stack". A pizza box with the logo of Well Stacked Pizza can be seen under the futon in the Bohan safehouse. The chain is mentioned on the Pißwasser website as one of the company's business partners, and the site americantravelguide.net claims to have all Well Stacked Pizza restaurants in Europe pinned on a map. All of this suggests that the company's stores were cut during the development of the game, as well as the fact that there are sound files in the game for workers.

In GTA San Andreas, the player is given a choice of four different meals at Well Stacked Pizza restaurants. All of the food choices besides the salad are references to breasts: "Buster" is from the word "bust", a word for breasts, or it could be a reference to Ryder's catchphrase. "Double D-Luxe" is from DD, the bra size, and having a "Full Rack" is slang for a woman with large, well-shaped breasts. In Las Venturas, the pricing of the Double D-Luxe, Full Rack and Salad Meal are 20% higher than in the rest of the state, as noted below: 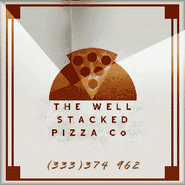 In Vice City, there is one store on the East island at Vice Point, and two stores located on the West Island at Little Haiti and Downtown. 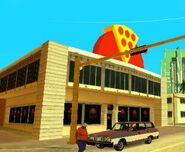 In GTA San Andreas, San Andreas has a total of 13 restaurants (10 being operational and accessible).

There is one store in Los Santos, located in Idlewood; three in Red County, located in Palomino Creek, Montgomery (unmarked on the map) and Blueberry; as well as two in San Fierro, located in Financial and Esplanade North. There are four operational outlets located in Las Venturas: Roca Escalante, Redsands East/The Emerald Isle, Pilgrim/Starfish Casino and Creek; three closed outlets, both unmarked on the map, are found at the Old Venturas Strip (two in very close proximity with each other) and in Redsands West.

The young man who serves Carl at all the locations tends to be sarcastic about the food served there, uttering phrases like "nice and cheesy does it!" He doesn't appear, however, to be as negative towards the customer as his Cluckin' Bell counterpart. 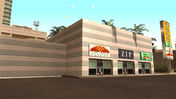 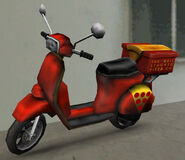 The worker placed in all restaurant counters, including Well Stacked Pizza. The model in internally named "burger". 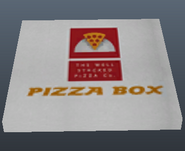 The same interior as viewed from the back of the counter. 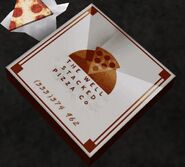 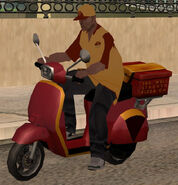 A Well Stacked Pizza Co. delivery boy on a Pizzaboy. 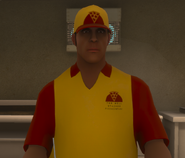 The Well Stacked Pizza Co. employee in the Definitive Edition.

The Well Stacked Pizza Co. Logo on a wall of the old and abandoned Alderney Casino.