None
The Twins are two women that appear in Grand Theft Auto: Vice City.

The twins are heavily featured in artwork promoting the game. One is on the cover of the game box art as well as the game disc, and in loading screens of the 10th Anniversary edition. They are featured in the original Playstation 2 game manual[1], on the front cover inside the "C" and "E" in "VICE" and again in the "Y" in "CITY" and on the back cover standing behind Ricardo Diaz being referred to as Diaz' companions known only as "the twins"[2], although they never appear in the game with him.

One of them makes an appearance in a short cutscene in the back room of the Pole Position strip club as a stripper, after the player first spends $300 on a dance.

The other twin appears as a bartender at the Malibu Club after Tommy Vercetti purchases the club.

Although they wear pink (white in 10th Anniversary artwork) bikinis in concept artwork, in the game they both wear stripper outfits[3] consisting of: cowboy hats, boots, pasties, thongs and strings holding money around their thighs.

A twin was featured in the official Rockstar Games The Lab (Part 1) flash animation where a voice actress was used to respond like a stripper to the reader when they hovered the mouse over her artwork.

In-game appearance and close-up (through the sights of a Sniper Rifle).

Front cover boxart featuring a twin on the left.

Artwork of "the twins" with Ricardo Diaz as seen the on the back of the PS2 manual.

Artwork of one of the twins. 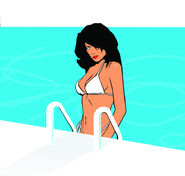 10th Anniversary art of one of the twins.

Another 10th anniversary artwork of one of the twins.

In the "Making of GTA Vice City".

One of the twins in graffiti on a wall in Grand Theft Auto IV.

One of the twins on an ad for The Directors Cut in Los Santos in Grand Theft Auto V.

Retrieved from "https://gta.fandom.com/wiki/The_Twins?oldid=1209796"
Community content is available under CC-BY-SA unless otherwise noted.