Flamethrower (during the mission Are You Going to San Fierro?)

Flamethrower (during the mission Are You Going to San Fierro?)

Peter Fonda
For the series of missions in GTA V, see The Truth.
“I mean, far out, man. You know, I mean, you beat the system! I tried for thirty years to cross over but you've managed it, man. I mean, man, you're an icon, man!”
— The Truth to Carl Johnson in End of the Line.

He was voiced by the late Peter Fonda.

The Truth is an elderly hippie who lives in Flint County and had previously owned a cannabis farm there. As a conspiracy theorist, The Truth is apparently well aware of conspiracies surrounding the government and related organisations (including law enforcement agencies and the police), which causes him to question Carl after doing missions for Mike Toreno. Truth also owns a van dubbed "The Mothership", although he claims to travel via his astral goat, Herbie, and is acquainted with mechanics Dwaine and Jethro, along with electronics expert Zero.

The Truth and Carl Johnson became friends while Carl was in exile in the Badlands, with Carl helping Truth in the theft of a combine harvester and the destruction of his own farm's crops after the police learn about the farm.

After Carl purchases an abandoned airfield on the outskirts of Las Venturas, The Truth once again seeks Carl's help, this time to steal government property , including a Jetpack from the Area 69 military complex and a containment unit containing unknown "green goo" transported by a heavily guarded train.

— Truth to Carl, after Tenpenny's death

Truth later appears after Frank Tenpenny's death, claiming that he tried to "beat the system" for 30 years, and congratulating Carl for doing so.

On two separate occasions, The Truth calls into the WCTR show Area 53 and talks about various conspiracy-themed topics. He states on the second time he calls in that he has "held them (aliens) in my own hands." The aliens he may be speaking about may possibly be the substance collected in the mission Green Goo. 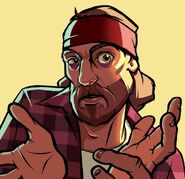 Artwork of "The Truth".

The Truth's first meeting with Carl.