Note: This ending is confirmed to be non-canon to the storyline and the events featured do not relate to the series and therefore didn't actually happen.

The Time's Come is one of three possible final missions and one of the 2 non-canon endings[1] of Grand Theft Auto V. The mission is triggered if Franklin chooses option B (Kill Michael).

Steve Haines and Dave Norton previously tasked Franklin with killing Trevor Philips, due to him being a liability, despite having saved both of them. Later, Devin Weston shows up at Franklin's house and tells Franklin to kill Michael De Santa, due to him also being a liability, for Molly's death and his failure to kill his family. Devin gives Franklin three choices, which appear on his phone as follows: Kill Trevor (A), Kill Michael (B), or Deathwish (C).

Choosing Choice B commences this mission and has Franklin call Michael to talk "somewhere quiet". Franklin also calls Trevor to see if he can help him kill Michael, but Trevor refuses to help, furious at Franklin's intent to betray Michael and declaring that he has had enough traitors in his life; before hanging up, he tells Franklin that he and Michael "deserve each other". Franklin meets Michael in a field of satellite dishes off Route 68 outside of Los Santos, where Michael reflects that through their partnership, Michael has developed a stronger bond with his family and he's in his dream job, and he is also announced through a phone call that Tracey made it into college. Franklin then attempts to ease his choice in by reflecting upon their experiences and telling him that he likes him and he risked everything for him, but Michael quickly realizes he is sent to kill him and gets into his car with Franklin shooting at him, beginning a chase along the railway lines.

The chase leads into the Palmer-Taylor Power Station, where Franklin chases Michael up the scaffolding to one of the chimney walkways after several shoot-outs. Michael expresses his disappointment towards his choice, claiming that Franklin was "like a son to him". They both then begin a small scuffle, with Michael showing anger and sadness at his decision and reflects on how he was the only decent person to him, while Franklin counters it by saying he was only ever Michael's "bitch". Shortly after, Franklin pushes Michael back, causing him to fall over the rail and is only held by Franklin. Franklin then starts to regret his decisions, but Michael objects and wishes he killed him before. Franklin can either pull Michael up or drop him to his death, however if he decides to pull Michael up, Michael will headbutt Franklin forcing him to lose his grip. Either way, Michael falls to his death, dying instantly once he hits the ground.

Afterwards, Franklin calls Lamar but ends up with his voicemail, regretting the decision he just made by the way he quotes Michael. Now resigned to the fact that he will never be more than a "hustler" and is back where he started at the beginning of the game, Franklin walks away from the power station as the credits begin rolling.

This section/page depicts all cutscenes and dialogues in the mission "The Time's Come" in Grand Theft Auto V. 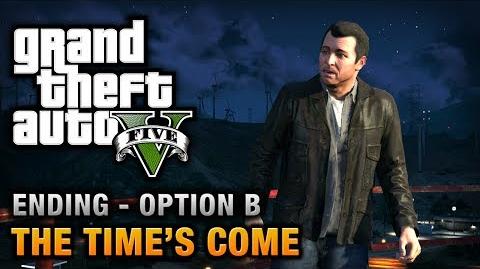 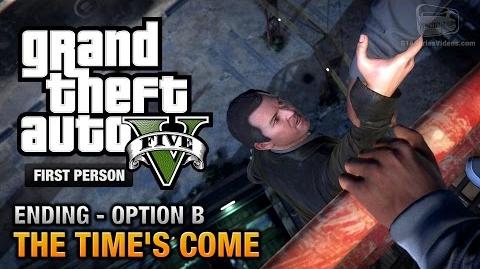 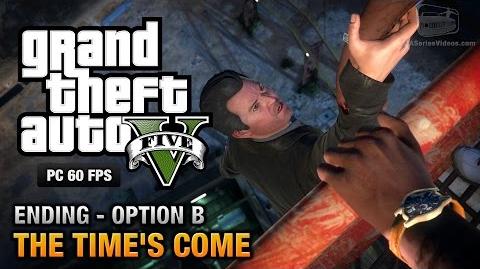